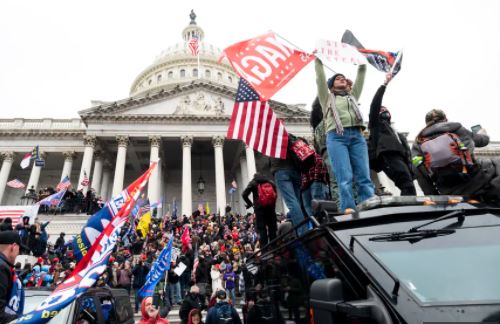 Call me old-fashioned, but when the president of the United States encourages armed insurgents to breach the Capitol and threaten the physical safety of Congress, in order to remain in power, I call it an attempted coup.

Last week’ rampage left five dead, including a Capitol Hill police officer who was injured when he tangled with the pro-Trump mob. We’re fortunate the carnage wasn’t greater.

That the attempted coup failed shouldn’t blind us to its significance or the stain it has left on America. Nor to the importance of holding those responsible fully accountable.

He should be impeached, convicted, and removed from office – immediately.

To let the clock run out on his presidency and allow Trump to seek the presidency again would signal that attempted coups are part of the American system. If Senate Republicans can install a new Supreme Court justice in eight days, Trump can be removed from office within ten.

He should then be arrested and tried for inciting violence and sedition (along with Trump Jr. and Rudy “trial-by-combat” Giuliani).

Those who attacked the Capitol should also be prosecuted. They have no First Amendment right to try to overthrow the U.S. government.

Trump’s accomplices on Capitol Hill, most notably Texas Senator Ted Cruz and Missouri Senator Josh Hawley, should be forced to resign. Knowing Trump’s allegations of voting fraud were false, Cruz and Hawley nonetheless led an attempt to exclude Biden electors, even after the storming of the Capitol.

The United States Constitution says that “no Person shall be a Senator or Representative in Congress” who “shall have engaged in insurrection or rebellion against” the Constitution, “or given aid or comfort to the enemies thereof.“

Both Cruz and Hawley are eyeing runs for the presidency in 2024. They should be barred from running.

Other abettors are now trying to distance themselves, but their conversions come too late.

Senator Lindsey Graham now says Trump must “understand that his actions were the problem, not the solution,” and criticizes the White House for making “accusations that cannot be proven.”

Graham had been one of Trump’s key attack dogs, even bullying state election officials to change voting tallies. If Graham is not forced to resign, he should at least be censured and stripped of his ranking membership on the Senate Judiciary Committee.

Senate Majority Leader Mitch McConnell and Vice President Michael Pence finally broke with Trump, but only after remaining mute as Trump lied and bullied his way through the last eight weeks, thereby signaling agreement with his preposterous claims.

McConnell should also resign or be censured and stripped of committee assignments. Pence should be barred from any future public office.

Some administration officials have already resigned in response to the attempted coup. Transportation secretary Elaine Chao said it was “entirely avoidable,” and education secretary Betsy DeVos told Trump there was “no mistake the impact your rhetoric had.” Other Trumpers are reportedly jumping ship, too.

Yet before Wednesday most of them defended Trump’s antics, lavished him with praise, and willingly did his dirty work. Their complicity should forever haunt their reputations and consciences.

For four years, Twitter, Facebook, and YouTube have functioned as Trump’s megaphones, amplifying his every lie and rant. When pressured to remove Trump’s fabrications about the election, they labeled them “disputed.”

Twitter has now permanently suspended Trump, preventing him from sending messages to his more than 88 million followers “due to the risk of further incitement for violence.” Facebook has banned him indefinitely. YouTube should be next.

But why did it take an attempted coup for them to act?

Many business leaders who are now denouncing the violence enthusiastically bankrolled Trump’s re-election campaign, knowing full well who he was and what he was capable of doing. And they’ve had no qualms about advertising on his largest megaphones, including Fox News. All are complicit because they knew Trump would stop at nothing.

All are all part of the ecosystem that led to Trump’s sedition. That ecosystem is still in place.

Those who say we should “look forward” to a new administration and forget or dismiss what occurred last week are delusional. Unless all who participated in or abetted the attempted overthrow of the United States government are held accountable, it will happen again. Next time it may succeed.

Robert Reich’s latest book is “THE SYSTEM: Who Rigged It, How To Fix It.” He is Chancellor’s Professor of Public Policy at the University of California at Berkeley and Senior Fellow at the Blum Center. He served as Secretary of Labor in the Clinton administration, for which Time Magazine named him one of the 10 most effective cabinet secretaries of the twentieth century. He has written 17 other books, including the best sellers “Aftershock,””The Work of Nations,” “Beyond Outrage,” and “The Common Good.” He is a founding editor of the American Prospect magazine, founder of Inequality Media, a member of the American Academy of Arts and Sciences, and co-creator of the award-winning documentaries “Inequality For All,” streamng on YouTube, and “Saving Capitalism,” now streaming on Netflix.