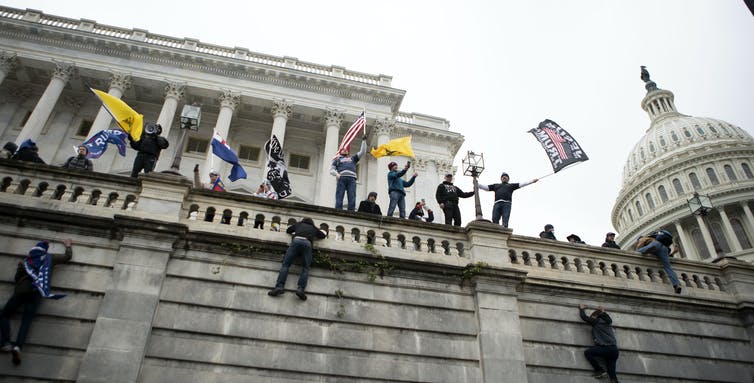 The storming of the United States Capitol may have failed to disrupt the certification of the election of Joe Biden and Kamala Harris, but it enacted a script favoured by coup-mongers around the world.

All that was missing was the intervention of the armed forces. The inaction of the Capitol Police contributed to the security breach, but the Pentagon remained above the fray.

The melée in Washington looked like the early stages of what in the Latin American context would be described as an attempted “self-coup” or autogolpe. That’s defined as an interruption of the constitutional and democratic order by means of the closure of congress and suspension of the constitution, typically followed by rule by decree and the perpetuation in power of an autocratic ruler. Variations on this script have been played out in Peru (1992), Russia (1993) and Guatemala (1993).

Reaching further back into history, examples of ambitious politicians disrupting established institutions to retain power can be found in the coup of the 18th Brumaire by Louis-Napoléon Bonaparte (the nephew of Napoléon Bonaparte) in France (1851), Oliver Cromwell’s dissolution of the Rump Parliament in 1653 and the rebellion of the Gracchi brothers in Rome (133-121 BCE).

Such episodes were not supposed to occur in the United States. The storming of the Capitol was a jarring affront to a revered symbol of the U.S. Constitution and government.

The United States has often held itself up to the rest of the world as an example of how to avoid the violence and corruption that doomed Rome and enfeebled European absolutist monarchs.

The attempted solution lay in a particular understanding of the separation of powers, an innovative model based not on parliamentary supremacy but on the explicit and intentional construction of checks and balances designed to uphold and protect the rule of law against the ambitions of unscrupulous rulers.

This system, which contemporary political scientists call presidentialism because it involves the separate election of the executive and legislative branches of government for fixed and (typically) limited terms, has been adopted by new democracies around the world. But many scholars have noted the fragility of presidentialism especially in countries where there are many parties and the rule of law is uneven because it creates competition and duelling claims of legitimacy among the various branches of government and political parties.

Today we see that weakness in a two-party system where the rule of law is supposed to be secure. What can the United States learn from the breakdown of presidential democracies elsewhere? The “slow death” of democracy typically starts with constitutional violations.

Donald Trump’s attack on Congress by inciting his mob of supporters to raid the Capitol was not his first assault on the constitutional separation of powers, but it was his most egregious for three reasons.

First, Trump used his office to incite the mob to attempt to influence the legislature. Second, his refusal to concede the election was itself an abuse of power: it is not up to the president to judge the outcome of an election. Third, and most shockingly, Trump and his enablers believe the president is de legibus solutus — that is, not subject to the rule of law.

However, the problem is not just that Trump abused his power; by undermining the separation of powers, he has weakened the whole American system of government.

The separation of powers is important not only as a restraint on the executive branch of government. More fundamentally, it creates a sensitive and delicate system of meaning-making that helps settle certain political questions in order to enable the political process to generate authoritative and legitimate outcomes.

It is not just that power checks power, but that each branch performs a distinctive function in co-ordination with the others. Only the legislature legislates; only the courts decide what is lawful; and the executive, which makes day-to-day policy decisions, must operate within the framework of established meanings, of agreed-upon facts and of authoritative interpretations of legally binding texts.

These outcomes are generated by the system of separate powers.

Trump is a saboteur

Aided and abetted by his Republican enablers, Trump has sabotaged the constitutional functioning of government, thereby turning a routine and pro forma process into a hotly contested partisan brawl, politicizing courts and bureaucratic agencies and promoting doubt and conspiracy theories in the place of scientific knowledge and expertise.

He has badgered state officials, interfered in judicial processes, pardoned cronies and incited violence. Yet even as he abuses power and strikes the poses of a tough leader, he has proven to be astonishingly weak in the face of major policy challenges, like the COVID-19 pandemic, that demand co-ordination and respect for the integrity of the diverse roles and offices of government.

Like autocrats throughout history, Trump fails to understand that the separation of powers is a source of strength, not weakness, in any democracy. His actions have pushed the U.S. down a path that has doomed dying regimes in the past.