Skip to content
The effort to divest from Wall Street—and stop environment-killing projects gained momentum after the historic pipeline protest. Here’s what a city needs, and could gain, from municipal banking.
by Deonna Anderson (posted Jan 02, 2019 in Yes Magazine)

In February 2017, Seattle became the first city to pass legislation to divest from a financial institution because of its role in funding the Dakota Access pipeline.

Months of rallies, public testimony at city council meetings, and protests at Wells Fargo branches across Seattle led to the unanimous vote to divest billions from the bank. Los Angeles and Philadelphia would follow. But when the time came to withdraw its money from the bank at the end of 2018, Seattle instead renewed its contract with Wells Fargo. The political decision to divest city money from one of the biggest banks funding DAPL was reversed because the city hadn’t found an alternative financial institution to house its money.

Throughout 2016 and after, indigenous activists (often referred to as water protectors) protested the DAPL at the Standing Rock camp in North Dakota. Despite opposition, the camp at Standing Rock was cleared in February 2017, and oil started flowing through the DAPL in June 2017.

But the camp wasn’t the only site of resistance. In October 2017, organizers—under the name Mazaska (“money” in Lakota) Talks—launched a campaign that urged individuals and larger entities, especially cities, to take money out of banks funding the DAPL and other pipeline projects transporting oil from Alberta’s tar sands, including Keystone XL, Trans Mountain, and Energy East.

The idea was that removing money from the banks could put a stop to the projects. The phrase “Kill the funding. Kill the pipelines” was commonly spoken by divest advocates.

Wells Fargo was one of 17 funders of the DAPL; others included Bank of America, Goldman Sachs, and JPMorgan Chase. In September 2017, Mazaska Talks reported that the divestment movement was responsible for over $5 billion being withdrawn from DAPL-funding banks. That figure included the billions divested by Seattle, Philadelphia, and Los Angeles and more than $80 million in individual accounts.

When Seattle announced it would stop banking with Wells Fargo, city officials cited the bank’s choice to fund the DAPL—as well as the 2016 customer fraud scandal—as reasons to move its money.

Public banks as an alternative

Moving city money out of Wells Fargo was a way for local politicians to put their money “where their values are,” said Seattle resident Matt Remle, co-founder of Mazaska Talks and a member of the Standing Rock Sioux tribe. That’s because council members would be removing city money from financial institutions that fund projects that hurt the environment and communities. Some of the banks that fund fossil fuel projects also fund private prisons, detention centers, and weapons manufacturers.

“We want an avenue through which ordinary people can access banking services regardless of income and in a way that does not engage in any exploitative practices,” said Seattle City council member Kshama Sawant, who was a co-sponsor for the divestment ordinance. 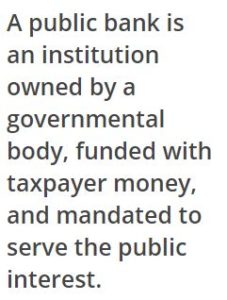 Once Seattle had committed to move its money, the city needed somewhere to move it to.

“When we were organizing around getting [Seattle] to divest, the question all along was what to do with the city’s money,” Remle said. “And our philosophy was it’s not going to be a victory to close accounts with Wells Fargo and go to Bank of America.”

A public bank is an institution owned by a governmental body, funded with taxpayer money, and mandated to serve the public interest. In summer 2017, Remle and other Seattleites started advocating for the city to establish a public bank, a process that could take years.

Sawant said a public bank “would be accountable to the people of Seattle in a way that you could never hold a private bank accountable,” adding that the city could better direct the bank’s resources, like loans, to projects that support community-directed goals. Remle noted affordable housing, homelessness services, and funding for higher education as causes the city might fund.

Ultimately, the city’s historic move to divest from Wells Fargo was undermined. It intended to end its relationship with the bank at the end of 2018, but the city failed to find a new place to house its $3 billion.

So it renewed its contract with Wells Fargo for three more years.

“At that moment there was no other choice but to continue with Wells Fargo, but it’s a reminder of how the movements work. Winning the Wells Fargo divestment was sort of step one,” Sawant said.

The next step, the council member said, is to demand that obstacles—such as the inability for credit unions to serve municipalities and the Washington law that bars cities from establishing any type of business entity—are removed so that the city or state can establish a public bank.

As it stands, North Dakota is the only place in the continental U.S. with a state bank. Bank of North Dakota was founded in 1919 and, for public bank advocates, it serves as a model.

Opponents of public banking have pointed to the failures of the 1800s public banks in Vermont and Indiana as examples of why public banks don’t work. While serving as the director of financial regulation studies at the Cato Institute, Mark Calabria argued that the public banks of this era were “characterized by rampant corruption.”

But advocates point to the success of Bank of North Dakota, established at a time when farmers in the state had trouble obtaining credit for their businesses, as evidence that a state bank could work. The bank was started to provide farmers credit and serve as the state’s financial repository. It has since evolved to finance the state’s infrastructure projects.“We need banks that are publicly owned so we can take our very substantial public deposits and public revenues and public resources and leverage them for local purposes instead of sending them to Wall Street,” said Ellen Brown, founder of the Public Banking Institute. “Cut out the middle man, basically, which is what the Bank of North Dakota does.”

While some profits from Bank of North Dakota are used to fund mission-driven loan programs related to economic development and infrastructure, the bank has also faced criticism for lending nearly $10 million for the law enforcement response to the #NoDAPL protests in North Dakota.

With that in mind, advocates in Seattle and elsewhere have been considering how to ensure transparency and accountability in municipal bank charters.

Seattle is just one entity looking to move its money out of corporate banks and into socially responsible ventures from which local communities would benefit.

Philadelphia, New Haven in Connecticut, and Santa Monica and Davis in California have divested money from large banks, and others—like Santa Fe in New Mexico, Oakland in California, and Washington, D.C.—have completed feasibility studies for public banks. But not many of these efforts have really taken off. Each location comes with its own set of challenges.

One barrier to getting a public bank off the ground is high startup costs. This was the case in Massachusetts, where a 2011 report from the Federal Reserve Bank of Boston—which used Bank of North Dakota as a model—estimated that startup costs for a state-owned bank in Massachusetts would have been $3.6 billion. Some advocates say this figure is an overestimate; banks generally need tens of millions to start, Brown said.The figure varies based on the bank’s location, growth prospects, and risk profile, according to the Partnership for Progress, a program of the Federal Reserve System.

Because proposed banks have unique business plans, market competition, and local economic context, among other factors, the FDIC does not prescribe a minimum of initial capital. But the agency does suggest that organizers examine “the risks inherent in the institution’s business model, the potential variability in earnings projections, and the skill and ability of the management team to carry out the business plan” when planning to apply for insurance. 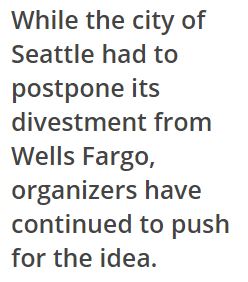 There are also legal challenges to establishing public banks in some locations. Many states and cities—including Oregon state, as well as Sante Fe and Los Angeles—have clauses in their constitutions or charters that inhibit the establishment of public banks. There’s movement in some places to overcome institutionalized policy barriers to establishing public banks. In Los Angeles, a measure on the November ballot that would have amended the city’s charter and allow it to explore establishing its own financial institution did not pass. And in San Francisco, a city report recently showed that state laws could not prevent the city from creating a public bank.

Both Los Angeles and San Francisco are part of the California Public Banking Alliance, with members across the state working to establish city and regional public banks that are “socially and environmentally responsible,” as noted on the coalition’s website. Additionally, the alliance has pushed for state legislation that would instruct the California Department of Business Oversight to issue a special license for cities to form public banks and allow them to bypass regulations that apply to private banks.

Over the years, Seattleites and Washingtonians have been pushing for a public bank. Since 2009, state Sen. Bob Hasegawa—who represents Seattle’s 11th state Senate district—has introduced nine bills to establish a state bank, and he championed a city-owned bank during his mayoral campaign in 2017. While none of the bills passed, state legislators funded a feasibility study in the 2017–19 operating budget.

The main obstacle to starting a public bank in Washington is that the state constitution prohibits the state and its cities from loaning money or credit to individuals, associations, or corporations.

The fight against the DAPL brought new energy to the effort in Seattle. Organizers believe a public bank could allow the city to have more funds to address the needs of residents.

“Recapturing some of that would create major savings that could help us fund things like education, housing, and transit,” wrote organizer Alec Connon on a blog for the climate justice group 350 Seattle. “Done right, a public bank would save city money, create jobs, and provide affordable loans to small businesses.”

While Seattle had to postpone its divestment from Wells Fargo, organizers—and city council members—have continued to push for the idea.

“That movement for divesting from Wells Fargo not only did the groundwork, but also set a line in the sand that this is something that we believe the city of Seattle should be going toward,” Sawant said, noting that there is still hope of establishing a public bank in the city.

“We don’t expect a straightforward path but we also believe that this is the correct thing to do.”

In December 2017, city council members voted to allocate $100,000 to conduct a feasibility study for a municipal bank. The study was released in October 2018 and concluded that creating a public bank would be an involved and long-term process. One of the next steps identified was for the city of Seattle to develop a business plan for a municipal bank that would meet all the legal and regulatory requirements in Washington. Council member Sawant has submitted a request for a business plan in the budget development process for 2019.

“We’re still looking at very long term. Even if the study comes back positive, the city council says yes, the mayor approves—we’re still looking at probably, I would assume, another year plus to get the actual infrastructure and everything kind of set,” Remle said. “But the wheels are definitely in motion.”

Correction: January 8, 2019.
A previous version of this article wrongly indicated that San Francisco’s city charter prohibits public banks. We have replaced it with Oregon state.

Correction: January 2, 2019.
This version classifies Bank of North Dakota as a public, not municipal, bank.