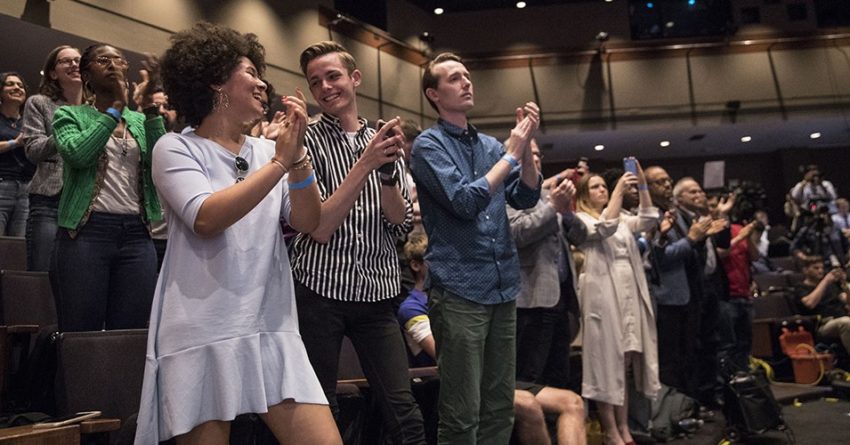 by Ernest A. Canning

We can have democracy in this country, or we can have great wealth concentrated in the hands of the few, but we can’t have both.

It is not hyperbole to suggest that Senator Bernie Sanders’s June 12, 2019 Democratic Socialism Speech was as profound as any delivered by either of the two men who Sanders frequently quoted: President Franklin D. Roosevelt and Dr. Martin Luther King, Jr.  It was a speech in which the Vermont senator revealed that his campaign, and accompanying “political revolution”, offer a unique vehicle for societal transformation—from what President Jimmy Carter described as “an oligarchy with unlimited political bribery” to the realization of the promise offered by President Abraham Lincoln in his Gettysburg Address: “government of the people, by the people and for the people.”

Sanders brilliantly coupled a condemnation of the tyranny of capitalist oligarchy with FDR’s recognition that democracy and freedom are unattainable in the absence of economic security. That message was so powerful that all three major corporate-owned cable networks—Fox “News”, CNN and MSNBC—abruptly terminated their live coverage mid-speech. They did so before Sanders outlined what he described as a “21st Century Economic Bill of Rights”.

Bernie noted that income and wealth inequality have soared to levels not seen since the onset of the Great Depression. “Three families,” he said, “control more wealth than the bottom half of our country, some 160 million people.”

That was actually an understatement. As of 2017, America’s three richest “individuals”—Bill Gates, Jeff Bezos and Warren Buffet—own as much wealth as the bottom 160 million, according to a report released by Institute for Policy Studies. “If left unchecked,” Josh Hardy, the study’s co-author observed, “wealth will continue to accumulate into fewer and fewer hands.”

Sanders underscored Hardy’s point by noting that “49% of all new income today goes to the top 1%.”

The problem of gaping inequality is not limited to whether it leads to an unsustainable breaking point that can spiral into the next Great Depression. As explained by Kevin Phillips, in Wealth and Democracy, quoting political scientist Samuel Huntington:

Extreme inequality is dangerous because, in Sanders view, it paves the way for demagogues to exploit widespread anger and despair, as occurred in the 1930s. “Then, as now,” Sanders proffered, “deeply-rooted and seemingly intractable economic and social disparities led to the rise of right-wing nationalist forces all over the world.”

“In Europe,” Bernie added, “the anger and despair was ultimately harnessed by authoritarian demagogues who fused corporatism, nationalism, racism and xenophobia into a political movement that amassed totalitarian power, destroyed, and ultimately murdering millions of people—including members of my own family.”

In an offhand admonishment to the “it can’t happen here” crowd—people who were shocked to see Neo-Nazis taking part in a torchlit march in Charlottesville—Sanders reminded us that “on February 20, 1939, over 20,000 Nazis held a mass rally…in Madison Square Garden, in front of a 30-foot tall banner of George Washington—bordered with swastikas.”

Sanders, a self-described “democratic socialist”, revealed that which political scientists have long known. Bernie is not a textbook socialist. He does not seek public ownership of the means of production. To the contrary, Sanders is essentially an FDR-like New Dealer, who calls for ordinary citizens to take on what FDR described as “the old enemies of peace—business and financial monopoly, speculation, reckless banking, class antagonism, sectionalism, war profiteering.”

Sanders, quoting Dr. Martin Luther King (“We all too often have socialism for the rich and rugged free market capitalism for the poor”), transformed the word “socialism” from a right-wing epithet into a useful tool for exposing right-wing hypocrisy. “President Trump and his fellow oligarchs,” Bernie observed, “hate democratic socialism because it benefits working people, but they absolutely love corporate socialism”. Examples of “corporate socialism” include massive government subsidies and tax breaks, the pharmaceutical industry profiting from public research, and a $700 billion Wall Street bailout that was accompanied by trillions of dollars in federal interest-free loans.

Bernie made a general reference to government subsidies received by the Trump Organization. In the future, he’d do well to specifically point to the $157 million in New York taxpayer monies used to build the privately-owned Trump golf course in the Bronx.

Without mentioning them by name, Sanders demolished the concept of “freedom” as advanced by self-described “libertarians”, like the rapacious Koch brothers.  Theirs is a vice-into-virtue ideology that extols individual greed as a virtue and rejects the very existences of a public interest beyond individual or group self-interest. It is a philosophy that is at odds with a core purpose of government, explicitly recognized by the U.S. Constitution—”to Promote the General Welfare.”

The “freedom” the Koch brothers extol is the unfettered ability of the privileged few to amass enormous wealth at the expense of the many. But, as first FDR, and now Bernie Sanders, forcefully observed, for the rest of us, there can be neither democracy nor “freedom” without economic security. After noting that extreme wealth inequality not only has a detrimental impact on the quality of life but has also produced a significant disparity in life expectancy, Bernie asked a series of rhetorical questions to drive home the point, e.g., “Are you truly free, if you cannot afford the prescription drug you need to stay alive?”

Sanders then argued for a “21st Century Bill of Economic Rights” in order to complete FDR’s “unfinished” New Deal. This would include the rights to “a decent job that pays a living wage,” to quality healthcare, a complete education, affordable housing, a secure retirement and to a clean environment. That, Bernie proclaimed, is the essence of “democratic socialism.”

Because of people like you, another world is possible. There are many battles to be won, but we will battle them together—all of us. Common Dreams is not your normal news site. We don’t survive on clicks. We don’t want advertising dollars. We want the world to be a better place.But we can’t do it alone. It doesn’t work that way. We need you. If you can help today—because every gift of every size matters—please do. Without Your Support We Won’t Exist.

Ernest A. Canning is a retired attorney, author, Vietnam Veteran (4th Infantry, Central Highlands 1968) and a Senior Advisor to Veterans For Bernie. He has been a member of the California state bar since 1977. In addition to a juris doctor, he has received both undergraduate and graduate degrees in political science. Follow him on Twitter: @cann4ing