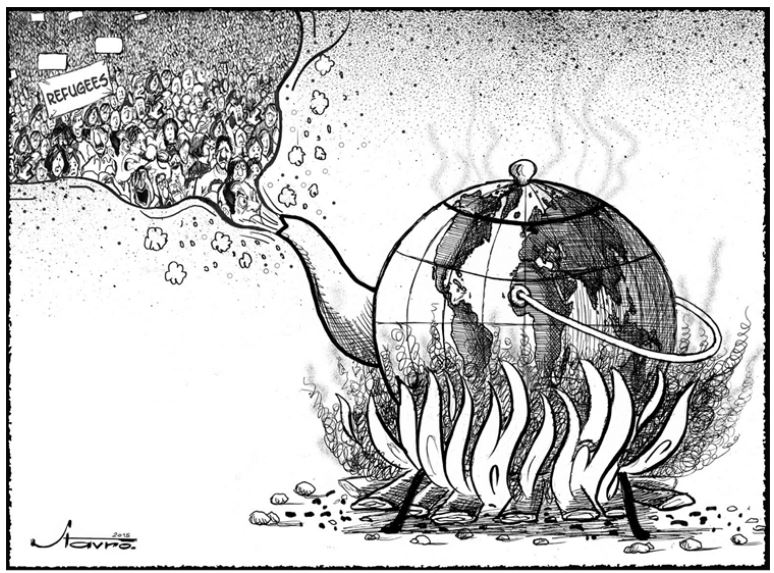 To Get an Honest Immigration System, We Must Reverse Reaganism

By Thom Hartmann
Reprinted from The Hartmann Report by permission of the author.

“Biden Faces Growing Political Threat from Border Upheaval” reads the headline in the Washington Post. But why?

Republicans are attacking Biden, saying he has “opened” the southern border. That message is getting to people south of the border and they’re showing up. They’re showing up because the Republicans are creating a self-fulfilling prophecy in order to sabotage Biden. And, as is so often the case, this all started with Reagan (more on that in a moment).

A group of Republican politicians just came back from our southern border and are now trying to create a giant PR event around their claim that President Joe Biden has “opened the border” to refugees and immigrants from the south. To add some salt to the stew of lies, they’re even throwing in Sri Lankans (seriously) and “terrorists.”

While it’s true that two factors have driven a lot of migration over the past few decades (climate change wiping out farmland, and political dysfunction and gangs caused by the Reagan administration devastating the governments of El Salvador, Honduras and Guatemala) the latest main driver of would-be immigrants and refugees is the Republican Party itself.

Lacking any actual, substantive economic issues to run on, the GOP has decided to fall back on a familiar ploy: scare white people that brown people are coming for them and/or their jobs. Back in the 1950s and 1960s, I remember well how the GOP pitch to white people was that Black people wanted “our” jobs; now it’s brown people from south of the border.

Trump did this in the most crude, vulgar and racist way possible from his first entrance into the Republican primary through the end of his presidency. It frightened enough white voters that it got him into office once, and the GOP is hoping they can repeat that trick in 2022 and 2024.

In doing so, they’re playing with fire. Their lies about American policies are causing people to put their lives in danger.

The truth is that Joe Biden never “opened” our southern border.

“Open borders” have never been his policy or the Democratic Party’s policy or, indeed, the policy of any elected Democrat or Democratic strategist in American history.

Everybody understands and agrees that for a country to function it must regulate immigration, and it’s borders must have a reasonable level of integrity.

Republicans are playing a very dangerous game here. By loudly proclaiming their lie that Biden has “opened” the southern border and is “welcoming” immigrants and refugees “with open arms,” they are creating the very problem they’re pointing to.

Republican lies like this don’t stay in the United States.

As they get repeated through our media, even when most Americans realize they’re simply wild exaggerations (at the most charitable), the media of other countries are happy to pick up the story and spread it across Mexico and Central America.

This, in turn, encourages the desperate, the poor, and the ambitious to head north or send their teenage children northward in hopes for a better life. Meanwhile, criminal cartels have jumped into the human trafficking business in a big way, exploiting and aggressively repeating the GOP rhetoric to recruit new “customers.”

I lived and worked in Germany for a year, and it took me months to get a work-permit from that government to do so. I worked in Australia, and the process of getting that work-permit took a couple of months.

In both cases, it was my employers who were most worried about my successfully getting the work permits and did most of the work to make it happen. There’s an important reason for that.

The way that most countries prevent undocumented immigrants from disrupting their economies and causing cheap labor competition with their citizens is by putting employers in jail when they hire people who don’t have the right to work in that country.

We used to do this in the United States.

In the 1920s, the US began regulating immigration and similarly put into place laws regulating who could legally work in this country and who couldn’t.

Because there was so much demand for low-wage immigrant labor in the food belt of California during harvest season, President Dwight Eisenhower experimented with a program in the 1950s that granted season-long passes to workers from Mexico. Millions took him up on it, but his bracero program failed because employers controlled the permits, and far too many used that control to threaten people who objected to having their wages stolen or refused to tolerate physical or sexual abuse.

A similar dynamic is at work today. Employers and even neighbors extract free labor or other favors of all sorts from undocumented immigrants in the United States, using the threat of deportation and the violence of ICE as a cudgel. Undocumented immigrants working here end up afraid to call the police when they’re the victims of, or witnesses to crimes.

Everybody loses except the employers, who have a cheap, pliable, easily-threatened source of labor that is afraid to talk back or report abuses.

It got this way in 1986, when Ronald Reagan decided to stop enforcing the laws against wealthy white employers hiring undocumented people, and directed the government’s enforcement activities instead toward the least powerful and able to defend themselves: brown-skinned immigrants.

The result is a labor market in the US that’s been distorted by undocumented workers creating a black-market for low-wage labor that many of America’s largest corporations enthusiastically support.

For example, prior to the Reagan administration two of the most heavily unionized industries in America were construction and meatpacking. These were tough jobs, but in both cases provided people who just had a high school education with a solid entry card into the American Dream. They were well paid jobs that allowed construction and meatpacking workers to buy a home, take vacations, raise their kids and live a good, middle-class life with a pension for retirement.

Reagan and his Republican allies, with healthy campaign donations from both industries, wrote the 1986 Immigration Reform Act to make it harder to prosecute employers who invited undocumented workers into their workplaces.

As Brad Plumer noted in The Washington Post: “[T]he bill’s sponsors ended up watering down the sanctions on employers to attract support from the business community, explains Wayne Cornelius of the Center for Comparative Immigration Studies at U.C. San Diego. ‘The end result was that they essentially gutted the employer sanctions,’ he says.”

So Reagan stopped enforcing our labor and immigration laws with respect to wealthy white employers, and the next 20 years saw a collapse of American citizens working in both the meatpacking and construction industries, among others.  Forty-dollar-an-hour American-citizen unionized workers were replaced with seven-dollar-an-hour undocumented workers desperate for a chance at a life in America for themselves and their children.

From the Republican point of view, an added bonus was that levels of unionization in both industries utterly collapsed. Reagan succeeded in transforming the American workplace, and set up decades of potential anti-Latinx hysteria that Republicans could use as a political wedge.

Without acknowledging that it was Reagan himself who set up the “crisis,” Republicans today hold serious-sounding conferences and press availabilities about how “illegals” are “trying to steal Americans jobs!” They’re all over rightwing hate radio and in the conservative media on a near-daily basis.

But it’s not poor people coming here in search of safety or a better life who are impacting our labor markets (and, frankly, it’s a small impact): it’s the companies that hire them.

And those same companies then funded Republican politicians who pushed under-the-radar social media ads at African Americans in 2016 and the last election saying that Democrats wanted Hispanic “illegals” to come in to take their jobs.

Nonetheless, to paraphrase Mitch McConnell, they persist. As the AP noted in a recent article: “Black lawmakers accused Republicans on Tuesday of trying to ‘manufacture tension’ between African-Americans and immigrants as GOP House members argued in a hearing that more minorities would be working were it not for illegal immigration.”

Tossing even more gasoline on the flame they, themselves, lit, Republicans are now amplifying the warnings and “danger” of undocumented immigrants by pulling out the Bush/Cheney “terrorist” card along with Trump’s “diseased rapist criminals” and “they want to take your job” trope.

Because the GOP has been playing these kinds of racist, xenophobic games with immigration since the Reagan era, our immigration and refugee systems are a total mess. Trump additionally did everything he could to take an axe to anything that wasn’t a jail or a cage…and turned those jail cells into sweet little profit centers for his private-prison donor corporations.

America needs comprehensive immigration reform and a rational immigration policy that’s grounded in both compassion and enlightened economic self-interest. We need an honest debate around it, stripped of the GOP racial dog-whistles. And our media needs to stop taking GOP lies about the southern border at face value.

Americans — and people who want to become Americans out of hope or desperation — deserve better.

Thom is a New York Times best-selling author of more than 30 books in print in 17 languages on 5 continents, and the #1 progressive talk show host in America for more than a decade. Thom has co-written and been featured in 6 documentaries with Leonardo DiCaprio about climate change. A former psychotherapist, entrepreneur and international relief worker helping the German-based Salem organization start programs for the dispossessed all over the world, Thom and his wife Louise live on the Columbia River with a small menagerie of cats, dogs, ducks and geese.