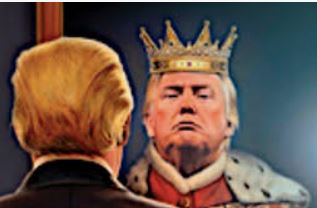 If you can stomach reading one more article about Trump and the craziness inside the White House in his last days, this should be it. The level of detail is remarkable. Jonathan Swan’s source must have been in the Oval Office when all this action took place.

Four conspiracy theorists marched into the Oval Office. It was early evening on Friday, Dec. 18 — more than a month after the election had been declared for Joe Biden, and four days after the Electoral College met in every state to make it official.

“How the hell did Sidney get in the building?” White House senior adviser Eric Herschmann grumbled from the outer Oval Office as Sidney Powell and her entourage strutted by to visit the president.

As Powell and the others entered the Oval Office that evening, Herschmann — a wealthy business executive and former partner at Kasowitz Benson & Torres who’d been pulled out of quasi-retirement to advise Trump — quietly slipped in behind them.

The hours to come would pit the insurgent conspiracists against a handful of White House lawyers and advisers determined to keep the president from giving in to temptation to invoke emergency national security powers, seize voting machines and disable the primary levers of American democracy.

Read the full article here: “Inside the craziest meeting of the Trump presidency“