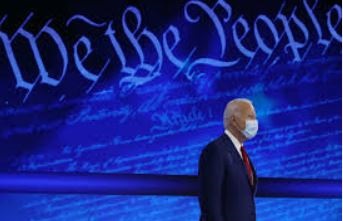 For many people, the lesson from the assault on the U.S. Capitol on Jan. 6, 2021 – and more broadly from the experience of the last four years – is that American democracy has become newly and dangerously fragile.

That conclusion is overstated. In fact, American democracy has always been fragile. And it might be more precise to diagnose the United States as a fragile union rather than a fragile democracy. As President Joe Biden said in his inaugural address, national unity is “that most elusive of things.”

Certainly, faith in American democracy has been battered over the last year. Polls show that 1 in 4 Americans do not recognize Joe Biden as the legitimate winner of the 2020 election. The turn to violence on Capitol Hill was a disturbing attack on an important symbol of U.S. democracy.

But there are four other factors that should be considered to evaluate the true state of the nation. Taking these into account, what emerges is a picture of a country that, despite its long tradition of presenting itself as exceptional, looks a lot like the other struggling democracies of the world.

Democratic fragility is not new

First, fragility is not really new. It’s misleading to describe the United States as “the world’s oldest democracy,” as many observers have recently done. By modern definitions of the concept, the United States has only been a democracy for about 60 years. Despite constitutional guarantees, most Black Americans could not vote in important elections before the 1960s, nor did they have basic civil rights. Like many other countries, the United States is still working to consolidate democratic ideals.

Similarly, the struggle to contain political violence is not new. Washington has certainly seen its share of such violence. Since 1950, there have been multiple bombings and shootings at the U.S. Capitol and the White House. Troops have been deployed to keep order in Washington four times since World War I – during riots and unrest in 1919 and 1968, economic protests in 1932, and again in 2021. The route from the Capitol to the White House passes near the spots where Abraham Lincoln was assassinated in 1865, James Garfield was fatally shot in 1881, and Harry Truman was attacked in 1950.

Political instability is also a familiar feature of economic downturns. There were similar fears about the end of democracy during the 1970s, when the United States wrestled with inflation and unemployment, and during the Great Depression of the 1930s. Of course, those fears had some justification. Many people wondered whether democratic governments could rise to new challenges. But there is evidence from historical episodes like this that democracies do eventually adapt – indeed, that they are better at adapting than non-democratic systems like the Soviet Union, which collapsed in 1991.

Finally, the debate about American democracy is fixated excessively on politics at the national level. This fixation has been aggravated by the way that the media and internet have developed over the last 30 years. Political debate focuses more and more heavily on Washington. But the American political system also includes 50 state governments and 90,000 local governments. More than half a million people in the United States occupy a popularly elected office. Democratic practices may be imperfect, but they are extensive and not easily undone.

On balance, claims about the fragility of American democracy should be taken seriously, but with a sense of proportion. Events since the November 2020 election have been troubling, but they do not signal an impending collapse of America’s democratic experiment.

A crisis of unity

It might be more useful to think of the present crisis in other terms. The real difficulty confronting the country might be a fragile national union, rather than a fragile democracy.

Since the 1990s, the country has seen the emergence of deep fissures between what came to be called “red” and “blue” America – two camps with very different views about national priorities and the role of federal government in particular. The result has been increasing rancor and gridlock in Washington.

Again, this sort of division is not new to American politics. “The United States” did not become established in American speech as a singular rather than a plural noun until after the Civil War. Until the 1950s, it was commonplace to describe the United States as a composite of sections – North, South and West – with distinctive interests and cultures.

[Get the best of The Conversation, every weekend. Sign up for our weekly newsletter.]

In 1932, Pulitzer Prize-winning historian Frederick Jackson Turner compared the United States to Europe, describing it as a “federation of nations” held together through careful diplomacy.

It was only in the 1960s that this view of the United States faded away. Advances in transportation and communications seemed to forge the country into a single economic and cultural unit.

But politicians overestimated this transformation.

Since the 1990s, old divisions have re-emerged.

America’s current political class has not fully absorbed this reality. Too often, it has taken unity for granted, forgetting the country’s long history of sectional conflict. Because they took unity for granted, many new presidents in the modern era were tempted to launch their administrations with ambitious programs that galvanized followers while antagonizing opponents. However, this winner-take-all style may not be well suited to the needs of the present moment. It may aggravate divisions rather than rebuilding unity.

Only 20 years ago, many Americans – buoyed by an economic boom and the collapse of the Soviet Union – were convinced that their model of governance was on the brink of conquering the world. President George W. Bush declared American-style democracy to be the “single sustainable model for national success.” By contrast, many people today worry that this model is on the brink of collapse.

The hubris of the early 2000s was misguided, and so is the despair of 2021. Like many other countries, the United States is engaged in a never-ending effort to maintain unity, contain political violence and live up to democratic principles.