Welcome to the world of environmental criminology.

By Patricia Pearson / Reprinted from AlterNet 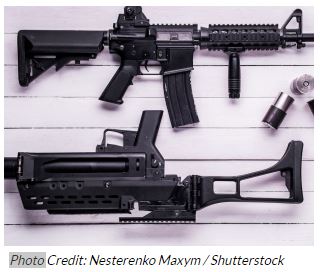 Canadians are reputed to be polite. But that isn’t a very compelling argument for why the lone wolves there are less inclined to engage in the kind of mass shooting that occurred in Orlando. All three pathologies that appeared to be in play at the horrific Pulse nightclub massacre—homophobia, psychological instability and adherence to a cult-like “Ism” that could act as a justifying frame in the killer’s mind—exist for some of Canada’s citizens as well. Two of those factors resulted in rifle bullets whizzing around the halls of the Canadian Parliament in October 2014.

The shooter, Michael-Zahef Bibeau, had an illegally acquired Winchester Model 94, a deer-hunting rifle that enabled him to fire off all of seven rounds before he had to halt in his tracks and fumble to reload. He was handily tackled at that point by security. Just hold that thought.

Canadians have had their fair share of “mass stabbings,” which virtually by definition don’t turn out to be particularly massive. Knives don’t kill people, people kill people, but people kill people on a markedly diminished scale with knives, and that’s hard not to notice for those of us who live outside the U.S.

To acquire and carry a gun in Canada, you need to go through a mind-boggling number of tests and procedures, the results of which are then vetted by police. Each one of these steps surely acts as a cool-down procedure on a mentally unstable mind.

Explosively enraged at the world? First attend your “gun safety class” on a Saturday, next available slot in two months, in the town 20 miles from your house. Then study for, write and pass the safety test that enables you to apply—to the police—for a license. That will entail extensive background checking on their part, after which you may or may not be freed to research where you can go to purchase your weapon and finally unleash your hateful rage.

A commonly repeated argument in the U.S. is that men of murderous intent will just go ahead and buy their guns on the black market. Perhaps, but in Canada apparently there aren’t many assault rifles lying around. The black market, after all, isn’t just down the street beside the corner store. It’s more akin to a word-of-mouth social network. Think loosely assembled gangs passing around Glocks as opposed to isolated, fantasizing aggressors with no real-world criminal ties, like Adam Lanza in Sandy Hook.

The internet is a grand marketplace for pathologies but not that helpful when things have to be delivered by UPS. So if the guns aren’t legally on offer, or indeed, in Lanza’s case, in the house, then the black market will tend to act as a baffle.

Canada’s largest gun massacre took place in 1989, the year the Berlin Wall came down. It was directed at female engineering students in Montreal, slaying 14. The date, December 6, has become a national day of mourning and activism for violence against women. In other words, mass shootings in your neighbor to the north are sufficiently rare that we all still focus on that particular event 27 years ago, in an annual memorial event. (The Montreal Massacre also led to an overhaul of gun laws.)

What, then, has enabled so many mentally unstable Americans to inflict so much carnage that America can sometimes feel as chaotic and unsafe as the marketplaces of Baghdad? If florid gun availability isn’t your go-to answer, consider the answer a different way. There is a subfield within criminological theory called “environmental criminology.” The ideas kicked around in this field are that people don’t commit crimes due to intrinsic factors like poverty or instability unless they are swimming in an environment of criminal possibility. Readily available, high-velocity weapons, for instance, would be a feature of that environment.

One of the frames for this discussion in criminology is “routine activities theory,” first proposed by Marcus Felson and Lawrence Cohen. According to this theory, a woman is more likely, for example, to be sexually assaulted in an urban area near a transit route than in an empty farmhouse far from help, because the farmhouse is simply not on her attacker’s routine pathway.

The criminologist Kim Rossmo of Texas State University in Austin has developed an investigative approach he calls geographic profiling, in which you can map the routine activities of unidentified violent offenders and determine where to look for them based on where they committed their crime. Why? Because the perpetrator will have traversed his daily life routes multiple times, like an animal circling its territory, before summoning the nerve to attack. Multiple times he will travel past the same bus stop where he began taking note of a potential victim, while on the way home from his job.

In light of these ideas, one might imagine what fermentation takes place in an unstable mind passing several times a month past a gun display. Guns like the AR-15 are, or have been until recently, on sale at Walmart, Target, Costco, and every other shop you’d routinely pass by as an American living in a state like Florida. What if, over time, an inchoate idea becomes fixed, or a plan becomes psychologically plausible because the opportunity repeatedly presents itself?

It’s like a nightmare funhouse version of the children’s story, The Little Engine That Could. The notion that those guns are easily available to you, and can be used to commit mass murder, is then, arguably, reinforced each time a mass murder makes headlines.

ISIL and Al Qaeda are undeniably goading anyone who will listen to take up arms against the West. But in North America at least, they aren’t the ones supplying the arms. Without ready access to guns, radicalized Canadians have done their best: one used a car to run over a Canadian Armed Forces Officer in Quebec two years ago. Others have been arrested for scheming to blow up a train.

Yet, from our standpoint as witnesses to the roiling tragedies of American gun violence, Omar Mateen actually has more in common with Adam Lanza of Sandy Hook and Virginia Tech shooter Seung-Hui Cho, in spite of their ostensibly different sources of inspiration. Senator MaCain may wish to blame Orlando on Obama’s foreign policy, but on what does he blame Sandy Hook and Virginia Tech and Georgia? The reality is that all of these shooters were swimming in the same violent sea.