The following interview  (with respected American journalists Robert Scheer and Chris Hedges) gives a better historical background of Mikhail Gorbachev’s role in the end of the (first!) Cold War than anything I’ve found lately. In the first 15 minutes of this video you can get a better understanding of the new Cold War and the current (proxy) war between the U.S, and Russia than a year of listening to the corporate media such as MSNBC and CNN, which have devolved primarily into unreliable propaganda. When, for instance, is the last time you’ve heard about Putin’s condemnation of the Communist Party, his effort to fight corruption and his hope of becoming a partner in NATO, and how the Democrats (my party!) have become the war party. You owe it to yourself to make this small effort. Without that minimal effort, your understanding of Ukraine is likely incomplete. [Don]

“Chris Hedges: Ukraine and the Politics of Permanent War”

“The United States of War: A Global History of America’s Endless Conflicts, from Columbus to the Islamic State” by David Vine 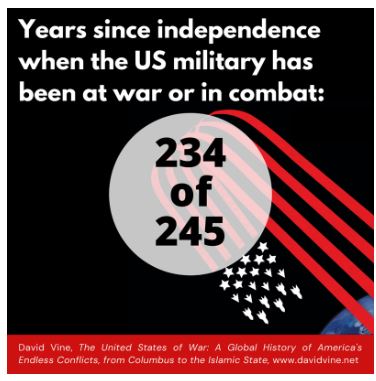