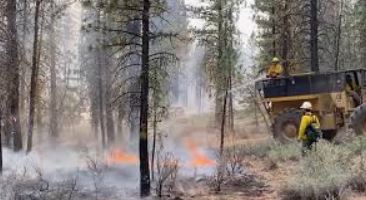 A story from Oregon offers lessons for a dried-out, overheated West.

As the Bootleg Fire in southern Oregon swept toward him last week, Pete Caligiuri of The Nature Conservancy hustled to lay out water pipes and start the sprinklers to wet down the area surrounding a remote research station. The approaching wildfire had raged so fiercely that it had begun generating its own weather. Clouds of hot smoke formed towering thunderheads, which cast lighting down among the dry trees and urged the flames forward with gusts.

The Nature Conservancy had been preparing for this moment for decades. The Jim Castles research station sits at the north end of the Sycan Marsh reserve: 30,000 acres of mixed wetland and dry pine forest in the Klamath Basin, which the nonprofit acquired in the 1980’s. The conservation group worked with the Klamath Tribes that call this area home to restore the forested areas to the landscape that existed before Americans took over the land and began putting out fires. They cut down small trees, leaving fire-adapted specimens like thick-barked ponderosa pines, and they began setting fires, allowing them to consume decades of needles and branches on the forest floor.

The Bootleg Fire, now the largest in the country, is testing these methods. And the results offer a lesson for woodland communities throughout the West struggling to adapt to harsher fire seasons brought on by rising temperatures. As Caligiuri, the conservancy’s forest program director, was getting the sprinklers going around the station, he was also listening intently to the voices of firefighters crackling through a radio. “What we were hearing was that, as the fire moved out of the denser forest into these areas that had been treated, it came down out of the canopy of the trees and dropped to the ground,” Caligiuri said.

That’s exactly what the conservationists had hoped would happen when the Bootleg Fire reached them. The fire moved gently along the ground and did not harm the research station. Caligiuri stressed that it’s far too early to consider his story as anything more than anecdotal evidence. But there’s abundant published science that supports the underlying theory.