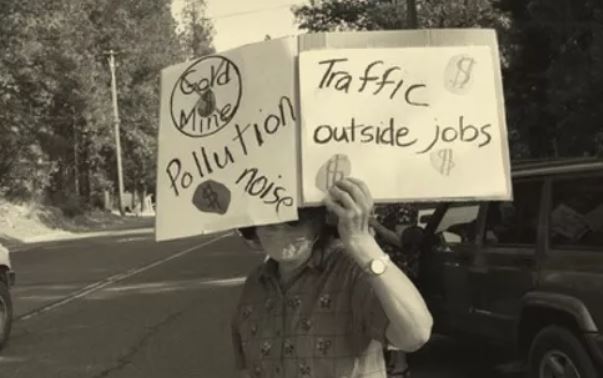 Editor’s Note: I’ve been searching through old articles published here a decade ago, about our struggle to prevent Emgold Corporation from re-opening the Idaho-Maryland Mine. Many of the articles are too dated to reprint now,  for instance ones that discussed Emgold’s plan to build a ceramics factory to repurpose old mine tailings. Rise has no such feature in its plan. But this article, from 2012, in which former council member and realtor Chauncey Poston discusses “disclosure law,” is still very relevant indeed, since Rise Gold Corporation has now applied to re-open the very same Idaho-Maryland Mine. [Don]

We attended a workshop at the Miner’s Foundry last weekend that included an interesting presentation by local realtor (and longtime citizen activist) Chauncey Poston, on the subject of “disclosure law.”

During the question period, I asked him whether, in his view, the current application by Emgold Corporation to re-open the Idaho-Maryland Mine would be considered an important fact to disclose to potential buyers of property in Nevada County.

He replied that he has been disclosing that fact to prospective buyers for at least the last six years.

A day or so later, in response to a follow-up question I sent him via email (asking whether he believed his local colleagues in the real estate business are following the same practice) he sent me this clarification:

The answer to your question is “I would hope so.” The subject of the mine re-opening is common knowledge to any person with a heart beat living in western Nevada county. Using the excuse “I didn’t know” would be indefensible. You simply can not get around that conclusion. Any Realtor listing or selling property in the area around the mine would be foolish not to discuss the mine with sellers, convincing them to disclose, and informing buyers (disclose) of the possibility of the mine re-opening. In a perfect world, the mine would be a topic of discussion between the buyer and his agent upon first visiting the property. In the end, disclosure of the mine would come from three entities: the seller, the listing agent, and the buyers agent.

Only a full and brutally honest EIR will come close to answering those questions as well as the hundred more questions uncovered by an adequate EIR.

My reply to Chauncey included these remarks:

I see your point about the million dollar question. Even hydrologists who’ve studied the first DEIR admit that they can’t predict with any certainty how widespread the impact of dewatering on wells might be.

I believe that local citizens generally don’t fully appreciate how massive this project would be: the underground extent of IMM goes from directly under the Sierra Nevada Memorial Hospital, under Brunswick Basin and all the way out to the Y intersection of Brusnwick and 174. It encompasses almost as many square acres underground as does the entire incorporated city limits of Grass Valley.