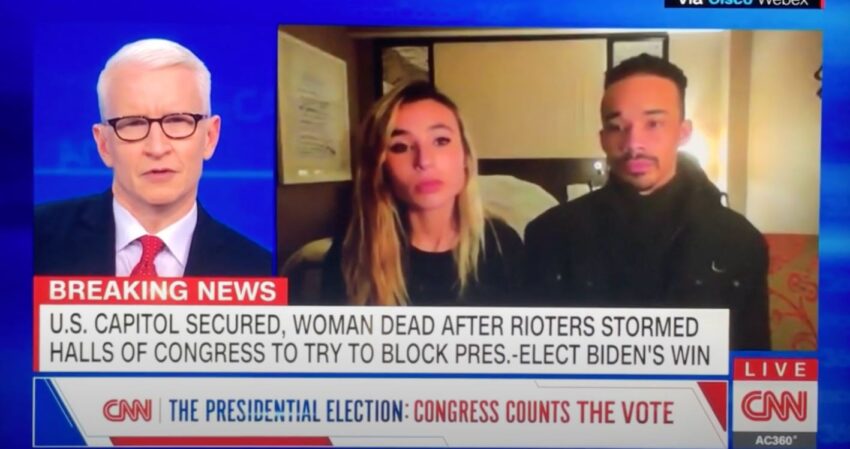 John Sullivan was at the front of the Trumpist mob in the Capitol, egging it on as he recorded the rampage. The far-right is pointing to him as proof of Antifa’s role in the riot. But leftist activists call him a dangerous provocateur and have banished him.

The most dramatic footage to emerge from the far-right storming of the US Capitol on January 6 depicted the lethal shooting of Ashli Babbit, a pro-Trump activist and military veteran, by a Capitol Police officer. The man responsible for capturing that video was John Sullivan, a self-styled activist who has operated under aliases “Activist X,” “Activist John,” and “Jayden X.” Since an interview with CNN’s Anderson Cooper, who described him as a “left-wing activist,” Sullivan has become Exhibit A in the right-wing’s conspiratorial case claiming Antifa was responsible for the violence in the Capitol.

Through interviews with Sullivan, his brother, a video-journalist documenting his exploits, and Black Lives Matter (BLM) activists who have encountered him, a more unsettling portrait has emerged that stands at stark odds with the pro-Trump narrative. While Sullivan has attempted to brand himself as a BLM leader, he has been effectively locked out from activist communities across the country, where he is almost universally regarded as a dangerous provocateur.

A close review of the raw footage he shot inside the Capitol and published on his personal YouTube channel shows him enthusiastically identifying with the right-wing rioters and their objectives, volunteering to use a knife to assist them, and instigating them to commit acts of violence on all the way up to the moment of Babbit’s shooting. He has insisted to me that he has no political ideology, while associates describe him as a nihilist committed to spawning chaos above all else.

In his appearance on CNN’s Anderson Cooper 360, Sullivan was allowed to paper over this disturbing reality by portraying himself as an independent journalist who was merely documenting the pro-Trump mob. In the Washington Post, he was described as a “liberal activist,” while the centrist fact-checking organization Politifact referred to him as a “left-wing activist.” MSNBC’s Chris Hayes played Sullivan’s video at length during a January 8 broadcast, stating that it was “licensed from a self-described civil rights activist.”

Right-wing media has feasted on these characterizations to paint Sullivan as a leading Black Lives Matter figure, driving the narrative that the violence inside the US Capitol was the result of leftist infiltration, and not the well-coordinated pro-Trump operation it clearly was. Fox News has dedicated an entire article to Sullivan’s presence at the Capitol, describing him as an “anti-Trump activist” with close ties to Antifa and BLM.

Trump legal counsel and former New York City Mayor Rudy Giuliani took to Twitter to highlight Sullivan’s role in the riot, calling him a “suspected BLM activist.” His post was retweeted over 28,000 times.

Despite the overwhelming presence of far-right and openly white nationalist activists in the Capitol, the right-wing has exploited Sullivan’s presence to blame the left for a catastrophe that Trump inspired. A recent Data For Progress/Vox poll showed that the right’s narrative has broken through, with 47% of Americans and 68% of Republicans holding Antifa responsible for inciting the violence in the US Capitol on January 6.

So who is John Sullivan, and what was his connection, if any, to Black Lives Matter and the wider left-wing activist community?

According to self-described BLM and anti-fascist activists familiar with the 26-year-old Sullivan, he is best known for his propensity for inspiring chaos, engaging in counterproductive tactics that often trigger arrests, and consistently undermining BLM objectives. From Salt Lake City to Portland to Washington, DC, left-wing activists consider him persona non grata.

The slick but scammy content of Sullivan’s Insurgence USA website underscores the reputation he has earned in BLM circles as a grifter. The most extensive section of his site is dedicated to hawking expensive riot gear, including a $45.95 spear tip knife. Sullivan happens to be a former salesman who left his career during the summer of 2020 after winning a racial discrimination settlement.