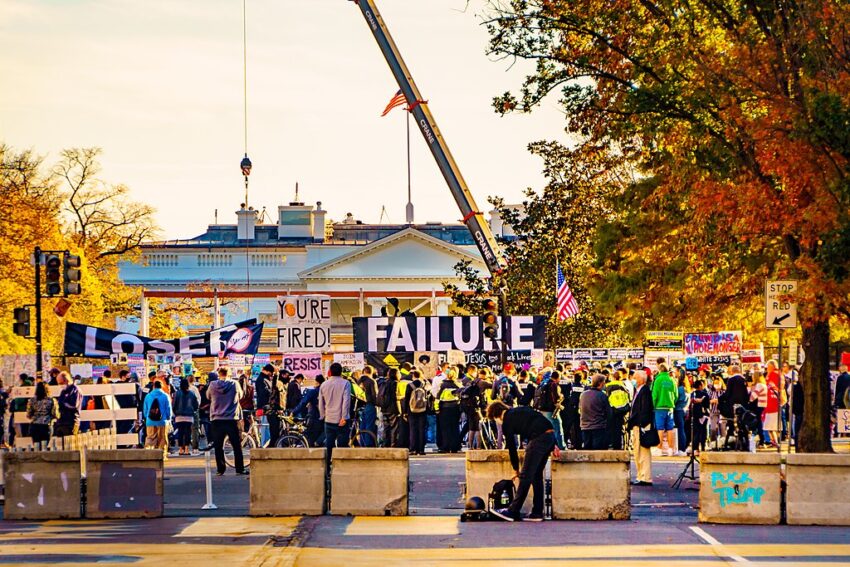 By Mitchell Zimmerman
Reprinted from OTHERWORDS under a Creative Commons License

Trump’s insidious rhetoric on the election won’t stop Biden from taking office, but it’s not harmless either.

( Otherwords.org) – Donald Trump’s refusal to accept the judgment of the American people might just seem like denial. But in denying the legitimacy of over 77 million votes against him, Trump and leading Republican politicians are implementing a design more sinister than poor sportsmanship.

Trump and his party have declared war on the fundamental principle of American constitutional democracy: When an incumbent loses an election, they leave office. A peaceful transfer of power follows.

Republicans know full well that Biden won. Republican as well as Democratic election officials from across the country confirm there’s no evidence of voter fraud. The election was not stolen.

Nonetheless, Trump and Republican politicians are scheming to persuade tens of millions of Republican faithful that our elections cannot be relied on and that Joe Biden is an illegitimate president.

In doing so, they are undermining the bedrock of American democracy: trust in peaceful elections in a constitutional order. And they demonstrate their animosity to electoral democracy itself.

Trump himself made his views all too clear before the election, when he repeatedly refused to agree he would accept it if he lost. His excuse was that mail-in votes were going to perpetrate a massive fraud. Consistent with that fabrication, he now asserts he won the election.

Voting by mail is allowed under the law of every state in the union, and citizens have voted that way for decades without fraud or other issues. In all their lawsuits, Republicans have presented zero evidence of even remotely significant fraud.

Trump’s insidious rhetoric on the election won’t stop Biden from taking office, but it’s not harmless. For if the election was “stolen,” the hate groups Trump asked to “stand by” could well take it as a signal to move against the new government and its supporters.

Of course, this is not the first time Trump and the GOP have disputed the legitimacy of a Democratic president. When Barack Obama became the first Black president, Trump built his political career trumpeting baseless claims that Obama was born abroad and wasn’t a U.S. citizen.

And it’s not the first time they’ve fomented violence either.

During the 2016 campaign, Trump routinely encouraged violence against peaceful protestors at his rallies.

This summer he defended a supporter who shot and killed two anti-racist protestors in Kenosha, Wisconsin. And he lauded the “passionate” nature of two young men who, citing Trump’s policies, beat a 58-year-old Mexican American man with a metal pole.

Trump retweeted a video in which a supporter says, “The only good Democrat is a dead Democrat.” And when a caravan of Trump supporters, some armed, menaced a Biden bus in Texas, reportedly trying to drive it off the road, Trump expressed his delight.

American democracy is a flawed instrument. Still, imperfect as it is, it’s worth saving — and the majority voted to save it from Trump’s creeping authoritarianism. But the danger is not over, because the party that lost has turned to challenging the foundation of our constitutional democracy.

What could more openly display contempt for democracy than crowds of Trump loyalists, echoing the demand of the great man himself, chanting “stop counting votes!”

Our election has been decided — by the lawful civic engagement of over 150 million Americans, peacefully casting ballots, nearly all of them already counted. A clear, plain majority gave their votes to Joe Biden.

Donald Trump and those who promote his lies and his refusal to yield to the voters are traitors to our Constitution.

Mitchell Zimmerman is an attorney, longtime social activist, and author of the anti-racism thriller Mississippi Reckoning. This op-ed was distributed by OtherWords.org.