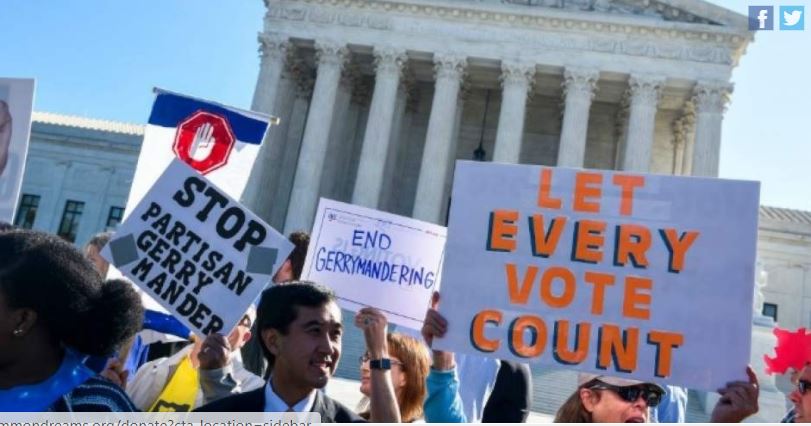 Here’s the background you need to know in order to understand the essay below by Thom Hartmann:

“Contrary to popular belief, there is not an affirmative right to vote in the U.S. Constitution

“While the U.S. Constitution bans the restriction of voting based on race, sex and age, it does not explicitly and affirmatively state that all U.S. citizens have a right to vote. The Supreme Court ruled in Bush v. Gore in 2000 that citizens do not have the right to vote for electors for president. States control voting policies and procedures, and as a result, we have a patchwork of inconsistent voting rules run independently by 50 states, 3,067 counties and over 13,000 voting districts, all separate and unequal.” (From Right to Vote Amendment).

Because We Don’t Have a Right to Vote…

If you care about the survival and expansion of democracy in America, this may be your last chance to get out there and vote. Republicans can’t win elections on their “ideas” of tax cuts for billionaires and eliminating protective regulations on polluting corporations.

By Thom Hartmann
Reprinted by permission of the author

In America, the country that is supposed to be the world’s premier democratic republic, citizens do not have an absolute right to vote.

Because we don’t have a right to vote, red-state governors can radically cut back on the number of polling places and voting machines so that working-class people are forced to stand in line for five, six, in some cases 10 hours to vote.

Because we don’t have a right to vote, about 30 million registered voters nationwide have been removed from the voting rolls since 2014, so when they show up to vote they are given “provisional ballots“ that, in red states, are almost never counted unless there is a lawsuit.

Because we don’t have a right to vote, back in the 1960s William Rehnquist helped organize “Operation Eagle Eye“ in Arizona to pull together a volunteer army of large and often uninformed white men to challenge Black, Hispanic, and Native American voters at the polls. It was so successful it kicked off Rehnquist’s Republican political career, taking him all the way to chief justice of the US Supreme Court, and is now being emulated by the Trump campaign.

Because we don’t have a right to vote, Florida’s Republican Governor Ron DeSantis has been able to prevent almost a million Florida citizens from voting if they owe fines or fees to the government.

Because we don’t have a right to vote, Louis DeJoy can destroy the US Post Office and slow down the mail just in time for the election and not face any legal consequences.

Because we don’t have a right to vote, in 2000 then-Florida Governor Jeb Bush was able to take a felon list from then-Texas governor George W. Bush and compare it to the Florida voter list, throwing about 90,000 African-Americans off the voting rolls because they had “similar” names just before the election that his brother “won” in Florida by 537 votes.

Because we don’t have a right to vote, voter intimidation has been documented over the past week in Nevada city, California; Philadelphia, Pennsylvania; Miami, Florida; Fort Morgan, Colorado; Albuquerque, New Mexico; and Los Angeles – and its a virtual certainty that nobody will go to jail.

Because we don’t have a right to vote, the Supreme Court told the Republican governor of Ohio – and now all governors – that he could remove millions of registered voters from the rolls because they hadn’t voted in the previous election and didn’t mail back a postcard.

Because we don’t have a right to vote, red state legislators have been able to force through laws requiring citizens to jump through extraordinary hoops like getting IDs they normally wouldn’t need or use, just to vote.

Because we don’t have a right to vote, Republicans in multiple states have used the courts to make it extremely difficult to vote by mail or drop off your ballot at a convenient dropbox during a pandemic.

Because we don’t have a right to vote, Republicans are rushing Amy Coney Barrett’s appointment to the Supreme Court through the Senate so she can be part of a repeat of the 2000 Supreme Court lawsuit, which she, John Roberts, and Brett Kavanaugh all worked on, that stopped the vote count and handed the presidency to George W. Bush.

Republicans can’t win elections on their “ideas” of tax cuts for billionaires and eliminating protective regulations on polluting corporations.

People don’t agree with them that Medicare should be privatized, Social Security shut down, and Obamacare destroyed.

A clear majority of Americans (including Catholics and Republicans) don’t think police and politicians should insert themselves between a woman and her doctor.

The vast majority of Americans think weapons of war should not be carried on American streets.

Because the majority of Americans disagree with Republican “ideas,” they’ve increasingly used voter suppression and voter intimidation as a primary strategy over the past 40 years.

The first piece of legislation the House of Representatives passed this session, HR1, helped establish an absolute right to vote. Mitch McConnell and Republicans in the Senate have refused to even hold a hearing on it.

If you care about the survival and expansion of democracy in America, this may be your last chance to get out there and vote.