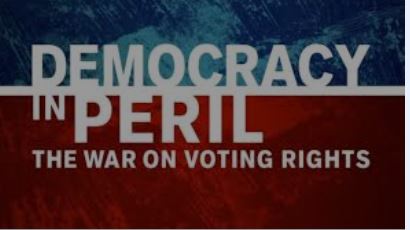 Editor’s Note: The “red shift” Thom Hartmann mentions in this article refers to the discrepancy between exit polls and actual election outcomes (which, up until a couple of decades ago, used to track very closely). If this difference was due to random errors, we would expect it to favor the two parties about equally, on average. But, on average, it conspicuously favors the GOP overwhelmingly. Thus, it’s called the “RED shift,” not the blue or purple shift.

Only an established, legal “right to vote” can defeat Republican voter suppression.

Republican politicians and conservative commentators are shocked, shocked! that Chief Justice John Roberts would say that people who voted before election day in Pennsylvania but their ballots were delayed by Lewis DeJoy’s sabotage of the Post Office should have their vote counted.

Increasingly, this election is coming down to the simple question of how effective 40 years of concerted Republican voter suppression efforts will be.

Their main strategy, particularly since George and Jeb Bush got together in 2000 to use a Texas felon list to purge 90,000 Black people off voting roles in Florida, has been removing the names of people who are legitimate voters.

Those people then go to the polls and are given “provisional ballots” which, in most cases, are only counted if there’s a lawsuit.

They think they voted, they tell pollsters they voted, but their votes don’t get counted.

Back in 2004, fully 22 states experienced what has now come to be called “red shift”-where the exit polls are “wrong” but almost always in a way that benefits Republicans.

For example, in the 2016 election, the exit polls showed Hillary Clinton carrying Florida by 47.7 percent to Trump’s 46.4 percent, although the “actual” counted vote had Trump winning by 49.0 percent to 47.8 percent. Trump gained 2.5 percentage points . . . somehow.

In North Carolina, exit polls showed Clinton winning 48.6 percent to 46.5 percent, but the votes that were counted turned out with Trump’s 49.9 to Clinton’s 46.1, a red shift of 5.9 percentage points for the GOP.

Just these differences, reflecting thousands of people who showed up, voted, and didn’t realize their votes were never going to be counted because they had been purged from voting rolls prior to the election, handed the White House to Donald Trump.

Perhaps even more interesting, in states without a Republican secretary of state, there is virtually no shift at all, either red or blue, and hasn’t been ever. The election results typically comport with the exit polls in blue states.

While there is a clear contest between Trump and Biden, between Republicans and Democrats across the country, the real contest going on right now is for the legitimacy and accuracy of American elections.

Republicans are doing everything they can to keep people from voting, and then, when people do vote, to try to prevent those votes from being counted.

When this election is over, if American democracy survives, our first project has to be to establish a firm, irrevocable right to vote for all American citizens.

Thomas Carl Hartmann (born May 7, 1951) is an American radio personality, author, former psychotherapist, businessman, and progressive political commentator. Hartmann has been hosting a nationally syndicated radio show, The Thom Hartmann Program, since 2003 and hosted a nightly television show, The Big Picture, between 2010 and September 2017.