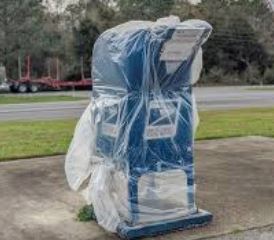 I called the office of Greg Diaz, the County Registrar, this morning and asked when they are planning to mail out the ballots for the November election. I was told that they will be mailed on October 5th, from Sacramento.

I’m not reassured that they are being sent from Sacramento, because I ordered a book from a San Francisco publisher about two months ago, and when it hadn’t arrived after about four weeks, I traced it to the Sacramento Post Office, where it had been languishing for almost a month. In the end, the publisher ate the cost of promptly sending me a replacement, via UPS!

Imagine multiplying this overhead cost to US businesses by the hundreds of thousands and you’ll get a sense of just one of the knock-on costs of the Republican war on the Post Office system, a “war” that is much older than crime boss Trump’s obvious desire to subvert the coming election. The more serious cost, of course, is the damage to our democracy, which is accelerating.

The person I spoke to in Diaz’s office said that if I don’t receive my ballot by mid-October, I should call them to get a replacement, which I can pick up in person (good idea)!