“The public utility is a much better option because you’re not having to worry about maximizing shareholder returns and you will make the safety investments that are necessary.”

Rep. Ro Khanna in an interview Friday voiced his support for public ownership of PG&E, the largest private utility company in his home state of California, as an alternative to the for-profit model that led the company to prioritize enriching investors over necessary wildfire-prevention measures.

“The for-profit motive does not work,” Khanna told HuffPost. “The public utility is a much better option because you’re not having to worry about maximizing shareholder returns and you will make the safety investments that are necessary.”

“Ro Khanna is exactly right. Utilities need to be doing everything in their power to tackle the climate crisis and keep their customers safe, not trying to make their Wall Street investors wealthier.”
—Sunrise Movement

PG&E’s failure to upgrade its hazardous and outdated infrastructure after its power lines caused devastating fires in 2018—even as it poured money into lobbying and payments to investors—forced the company to temporarily cut off power to millions of Californians as heat, dry weather conditions, and high winds sparked wildfires across the state.

The bankrupt utility giant admitted its aging equipment may have played a role in causing the massive Kincade Fire in northern California, which has burned over 75,000 acres and is currently around 65 percent contained. PG&E also said downed power lines may have started two fires last month in the San Francisco Bay Area.

According to CNN, more than a dozen wildfires are currently raging across California. Khanna, who represents Silicon Valley, said “when you have the public that’s running the utilities, they’re going to care about the consequences of climate changes.”

“They’re going to support renewable energy,” said the California Democrat. “They’re not going to be motivated by profit.”

“The idea of having a private entity like Berkshire Hathaway buy it makes no sense,” said Khanna. “They’re still going to be driven by profit motive.”

“Utilities need to be doing everything in their power to tackle the climate crisis and keep their customers safe, not trying to make their Wall Street investors wealthier.” 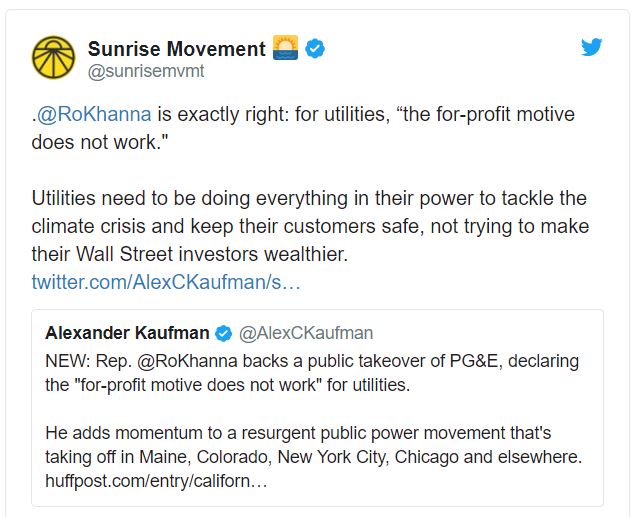 Khanna’s call for a public takeover of PG&E came just days after Sen. Bernie Sanders (I-Vt.), a 2020 Democratic presidential candidate, said “it is time to begin thinking about public ownership of major utilities.” Khanna is the national co-chair of Sanders’ presidential campaign.

“Our hearts go out to Californians affected by the devastating wildfires,” said Sanders, whose Green New Deal plan calls for the creation of “a modern, high-volt, underground, renewable, direct current, smart, electric transmission and distribution grid.”

In an op-ed for OtherWords on Wednesday, Jill Richardson wrote that “California’s wildfires and blackouts show the dangers of entrusting our power to for-profit corporations.”

“When we privatize our utilities, we limit the solutions we can choose from to those that are profitable to a corporation,” said Richardson. “We risk situations like the one we are in now, in which the public is suffering the consequences of decisions a private entity made to maximize its own profits.”

“The public interest, not private profit, should be priority No. 1,” Richardson wrote. “If there’s a silver lining to this mess with PG&E, it’s that more people will demand that.”

One thought on “Because ‘For-Profit Motive Does Not Work,’ Ro Khanna Backs Public Ownership of PG&E as Fires Rip Through California”