Skip to content
Published on Tuesday, July 02, 2019 by Common Dreams

Warren says that his case has generated “a greater awareness of the humanitarian crisis in the bordlerland… and a flood of water into the desert at a time when it is most needed.”

Federal prosecutors in Arizona announced Tuesday that they will seek a retrial in the case of humanitarian aid volunteer Scott Warren, who could face several years in prison for providing food, water, clean clothes, and beds to migrants in the desert.

The move by the U.S. Attorney’s Office for the District of Arizona comes after Warren’s first trial ended with a hung jury last month. The Arizona Republic reported Tuesday that “Anna Wright, an assistant U.S. attorney, said in Tucson federal court that the government would dismiss one count of conspiracy to transport or shield, but that they would seek a retrial on two counts of harboring an undocumented immigrant.”

Warren—a 36-year-old college geography instructor—and two undocumented migrants were arrested in January of 2018 after Border Patrol agents set up surveillance outside “The Barn,” a building in the Ajo, Arizona where humanitarian workers provide migrants with water and other essentials. Human rights advocates worldwide have accused the Trump administration of “criminalizing compassion” with the decision to charge Warren with multiple felonies. 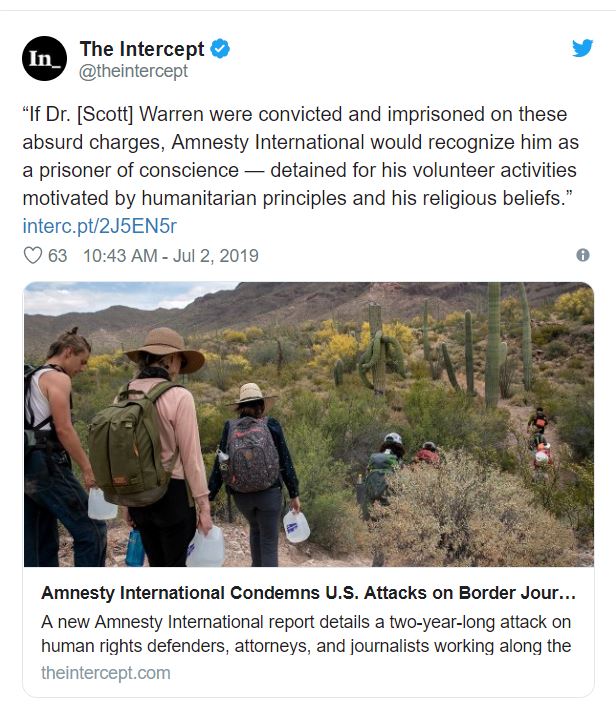 The humanitarian group No More Deaths/No Más Muertes, for which Warren is a volunteer, tweeted in response to the retrial announcement that the U.S. government is continuing the “unconscionable prosecution of [an] aid worker in midst of a humanitarian crisis at our border.”

Though the new trial is currently scheduled for later this year, the government reportedly put forward a plea deal on Tuesday that would keep Warren out of prison.

According to the Republic:

Prosecutors also announced a plea offer to Warren to plead guilty to a misdemeanor of aiding and abetting with a sentence of time served. If convicted of the more serious, felony charges for harboring, Warren could face up to 20 years in federal prison.

U.S. District Judge Raner Collins set the start of the second trial for Nov. 12. Warren has 10 days before that date to decide whether to take the plea deal.

Speaking to journalists and supporters outside the courthouse Tuesday, Warren did not comment on the government’s plea offer. The Arizona Daily Star reported that his attorney, Amy Knight, promised, “We will continue to defend [him] for as long as necessary.”

Reading a prepared statement outside the courthouse, Warren said the case “has been deeply exhausting and troublesome to my friends and family and loved ones,” but also that “we are ready for this second trial and more prepared than ever.”

“While I do not know what the government has hoped to accomplish here,” he added, “I do know what the effect of all this has been and will continue to be: a raising of public consciousness, a greater awareness of the humanitarian crisis in the borderland, more volunteers who want to stand in solidarity with migrants, local residents stiffened in their resistance to border walls and the militarization of our communities, and a flood of water into the desert at a time when it is most needed.” 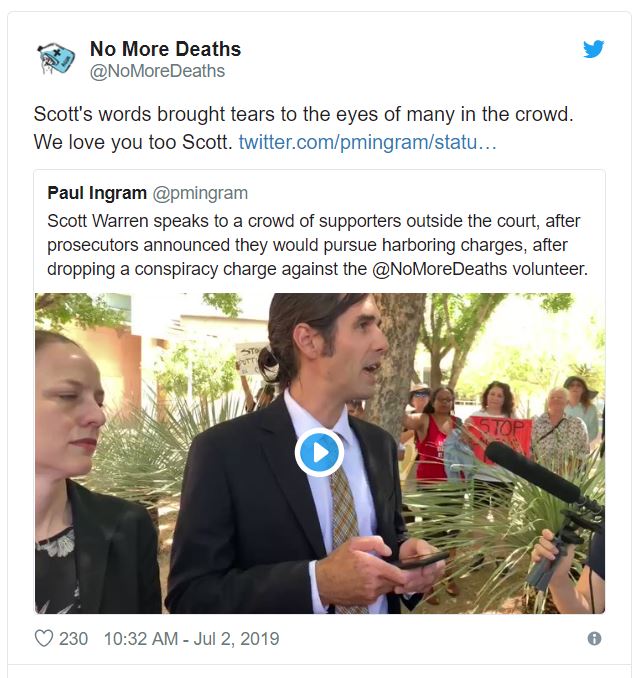