“We are in a climate emergency. In 2020, true climate leadership means nothing less than saying ‘yes’ to a Green New Deal and ‘no’ to fossil fuels.”

Highlighting the chasm between two of the top 2020 presidential contenders when it comes to commitment to bold climate action, a scorecard released by Greenpeace Thursday placed Sen. Bernie Sanders at the front of the list of leading Democratic White House hopefuls and ranked former Vice President Joe Biden dead last.

“Sen. Sanders has championed bold climate action for years,” Greenpeace noted in its assessment of the Vermont senator’s record and current platform, which earned him a B+ grade.

“The bar is high because nothing less than transformational action can guide us out of this crisis. Show us you have the mettle to take on the oil executives standing in the way of progress.”
—Janet Redman, Greenpeace USA

“In Congress, Sen. Sanders co-sponsored the ‘100 by 50 Act’ and ‘Keep It In the Ground Act’ to cut off federal support for coal, oil, and gas while ushering in 100 percent clean energy by 2050,” said Greenpeace, which ranked candidates on the basis of their support for the Green New Deal, commitment to rejecting fossil fuel cash, and other metrics.

“Sen. Sanders co-sponsored the Green New Deal resolution and has pledged to halt new federal fossil fuel projects if elected—but has yet to call for a full, managed phase-out of the fossil fuel industry,” Greenpeace said. “He also has yet to put forth a detailed plan to tackle the climate crisis. Keep it comin’, Sen. Sanders!”

Biden, by contrast, has neither backed the Green New Deal resolution nor taken the No Fossil Fuel Money Pledge, a vow to reject “any contributions over $200 from the PACs, lobbyists, or executives of fossil fuel companies.”

Greenpeace said that while Biden—who received a D- grade—”introduced the first-ever climate bill in Congress back in 1987, he has yet to release a plan that tackles the climate crisis if elected in 2020.”

According to a Reuters report earlier this month, Biden’s 2020 campaign is crafting a “middle ground” approach to the climate crisis that would reject progressive demands for transformative action while leaving the door open to so-called “fossil fuel options.”

“Biden has not endorsed the Green New Deal, nor committed to phase out fossil fuels,” said Greenpeace. “All candidates must pledge to make bold climate action a Day One priority in office. What will Biden do?”

Here is Greenpeace’s ranking of Democratic presidential candidates who are currently placing in the top six in national polls:

Looking beyond the polling leaders to the entire 2020 Democratic field, the Greenpeace scorecard placed Washington Gov. Jay Inslee at the very top of the crowded pack with an “A-” grade.

Inslee, Greenpeace said, has “laid out the most detailed plan of any candidate so far that’s right in line with a Green New Deal and championed bold action as governor of Washington state.”

As Common Dreams reported, Inslee’s $9 trillion climate plan would transition the United States to 100 percent renewable energy by 2035 while aiming to create millions of jobs.

President Donald Trump, meanwhile, received an F from Greenpeace—specifically a zero out of possible score of 100—for “putting the most vulnerable communities and our very future at risk.”

“Far from championing bold climate action,” Greenpeace said, “President Trump has denied the reality of the climate crisis and actively promoted fossil fuel production at the expense of communities and a safe climate future.” 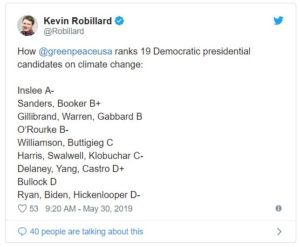 In a statement on Thursday, Greenpeace USA climate campaign director Janet Redman urged the candidates who have committed to bold climate action to “keep it up.”

To those at the bottom of the pack, Redman said, “step it up.”

“The bar is high because nothing less than transformational action can guide us out of this crisis,” Redman said. “Show us you have the mettle to take on the oil executives standing in the way of progress towards the green, prosperous future our country deserves.”

“We are in a climate emergency,” Redman added. “In 2020, true climate leadership means nothing less than saying ‘yes’ to a Green New Deal and ‘no’ to fossil fuels.”