“This is a very bad idea, House Democrats. It makes no sense whatsoever to give Republicans veto power over progressive legislation.”

Nearly three-quarters of the American public and a historic number of Democratic lawmakers support Medicare for All, but the House Democratic leadership is considering using its newly won majority to impose a rule that would “recklessly betray” the grassroots forces that put them in power by making single-payer and other progressive priorities impossible to enact.

According to a list of Democratic proposals obtained by the Washington Post, House Minority Leader Nancy Pelosi (D-Calif.)—who is currently fighting back against efforts to prevent her from becoming House Speaker—is pushing for a rule that would “require a three-fifths supermajority to raise individual income taxes on the lowest-earning 80 percent of taxpayers.”

In response, MoveOn.org called the proposal “a staggeringly bad idea.”

Though the proposed rule is framed as an effort to protect the financial well-being of middle class Americans, Eric Levitz of New York Magazine pointed out that “while progressives are committed to increasing the discretionary income of the bottom 80 percent, that does not necessarily mean keeping their tax rates frozen at historically low levels.”

“A bill that required those households to pay a new, smaller monthly sum to the government—so as to fund a single-payer system that would actually reduce their cost of living by delivering radically cheaper healthcare services—could hardly be called regressive,” Levitz notes. “And the same can be said for legislation establishing universal child care, paid family leave, or any other program aimed at easing the middle class’s financial burdens.”

“Equating support for middle-class families—with opposition to increasing their tax rates—is a conservative project, which Democrats have no business advancing,” Levitz added. “If the party wishes to establish structural barriers to policies that would hurt the middle class, why not require a three-fifths majority to cut Medicaid, Medicare, or Social Security?”

Combined with Pelosi’s expressed committment to reviving the “economically illiterate” pay-go rule—which would require that all new spending be offset by spending cuts or tax hikes—the proposed tax restriction would completely undercut Medicare for All, free public college, a federal jobs program, and other ambitious left-wing policies by dramatically restricting the party’s ability to raise revenue and effectively handing Republicans the power to block progressive legislation. 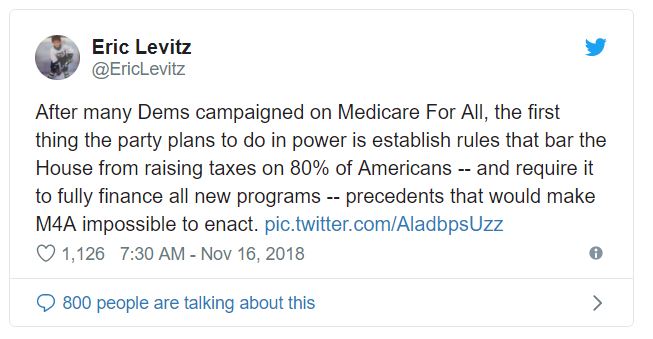 “It would be a profound mistake for House Democrats to retake Congress with dozens of candidates who ran on Medicare for All and then pass an absurd, right-wing framed rule that would actively prevent us from taking action on it.”
—Democracy for America

The proposed rule, Phillips added, would constrain “revenue that can be generated for many of the kind of bold investments we need to be making in terms of healthcare, education, infrastructure, etc.”

Progressive advocacy groups and experts registered their outrage at Pelosi’s rule proposal on social media on Friday, with economist Stephanie Kelton warning that the Democratic leader’s measure would completely “kneecap the progressive agenda.” 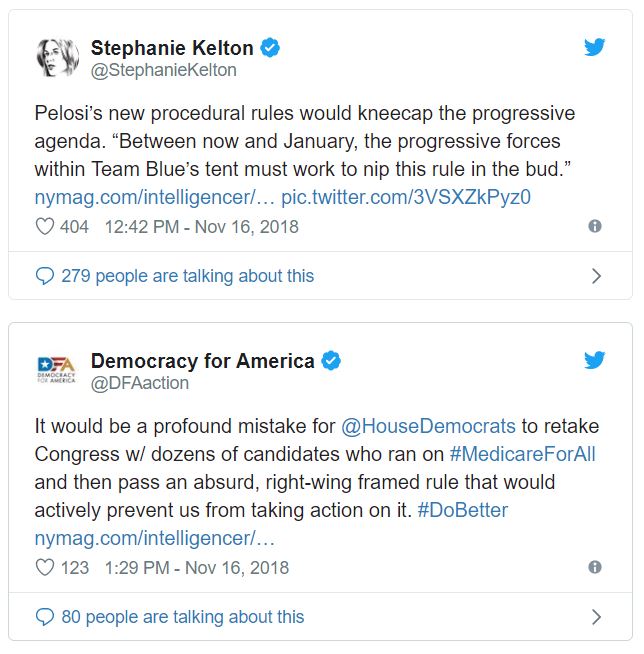 “This is a very bad idea, House Democrats,” CREDO Mobile declared. “It makes no sense whatsoever to give Republicans veto power over progressive legislation.”