I just ran across this Amazon book review I wrote back in 2001, of Katie Hafners’  The Well: A Story of Love, Death & Real Life in the Seminal Online Community. 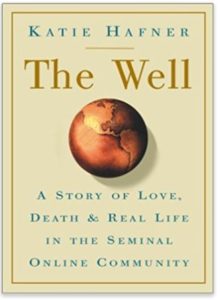 The WELL, started by Stewart Brand and Larry Brilliant in 1985, was one of the first online virtual communities. For a time in the late 1980s I moderated an Aging conference there. In my early forties I was just beginning to grapple with issues of aging, and the WELL felt like a community, a good place to talk about it with others who were similarly afflicted.

Was it really a community? That’s one of the issues Hafner explores.

Since the advent of social media in recent years, I might be inclined to alter some of the conclusions in my old review regarding community, but then again I might not. The “friend” function in Facebook, for instance, is a sad and pale shadow of the sort of real friendship that often seemed to be the rule in the WELL. Rereading my review today, I was surprised to notice that I’ve forgotten the affection I felt for the WELL, an affection that lingered for many years after my involvement with it.

This is a terrific book. I appreciate that Katie Hafner understands her strength to be narrative. Limiting the focus of her narrative to the lives of a few of the core founders and early pioneers of the WELL allows her to reach the sort of depth I recall experiencing there when I was a “WELL being” for a time in the late eighties.

I mostly hung out in the Parenting conference, because I was the father of teenage children and our family seemed to reel from one crisis to another during those years. The support and love I found there was extraordinary, and I have found it nowhere else since, except within my own dear family.

Hafner succeeds remarkably in capturing the intangible essence of the WELL, the special human warmth that no one could have predicted or planned … and no one has succeeded in duplicating since.

Hafner also deals with the core issue of community, an issue central to the WELL’s success, and possibly central to it’s eventual – what? – transformation. I was about to say, “dissolution,” but an incarnation of some sort of WELL lives on at Salon.com.

The early WELL, the one I knew, was a pioneering online community, before that phrase became today’s buzzword meaning little more than a chat room. The online community was the core of a larger, real-life, flesh-and-blood community, in which people truly lived and loved and became sick and got well, and sometimes died.

Everyone who hungers for community – and that means everyone awake to the grief of modern life – should read this book. Most of us understand true community by its absence. My most vivid and unexpected realization about the meaning of community occurred many years ago, when our children were still little.

We lived for a time in an Eichler suburb in Mountain View, California. Each house on our block was surrounded by a high fence. After some months of living there, we hadn’t met a single neighbor. I was out mowing the lawn one sunny Saturday morning, with no one in sight, and I suddenly understood in a way I never had before that our commercial culture has a vested interest in the destruction of community.

It’s because of this paradoxical dynamic that the WELL – to the extent that it *was* a true community – could not retain its character while evolving as a commercial enterprise. This is part of the story.

Read this book. Let it provoke you to examine the role of community in your own life.

The WELL lives on here: