This “old Cherokee story” continues to make the rounds on the Internet. I saw it most recently on Facebook, posted like this:

As much as I love this old story — and I do love it — I think it’s important to understand and accept that we can’t ultimately defeat and destroy the Evil Wolf (all those dark forces within us) and live thereafter as “beings of light.” This is not some New Age parable. Rather, as the story says, “there are two wolves inside us all.” There will always be two wolves inside us all. The best we can do is become more consciojus and aware of the Evil Wolf (or, in Jung’s terminology, our Shadow). “Feeding” the Evil Wolf is equivalent to following it’s claims and urges as if they were the true path of virtue. Not feeding it consists in seeing it for what it is.

The Wolf that “wins” only wins provisionally and for the moment.

It’s important to accept both wolves as core parts of our nature.

Trying to rid ourselves of the Evil one is rather like Christianity’s psychologically unrealistic project of ulltimately defeating Satan. The problem with this project is that we’re constantly finding enemies out there and never confronting the Evil Wolf in ourselves. We’re constantly at war.Accepting both the Good and Bad Wolf as our own is more like the psychologically healthy image of the Hindu goddess, Shakti (consort of Shiva), who is often protrayed both as a destroyer and as a creator. On balance, I think the old Cherokee story is more akin to Hindu (and less to Christian) psychology (which we in Western civilization have inherited, whether we are individually Christian or not). 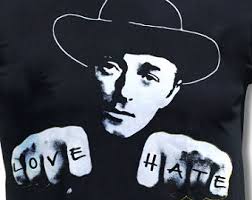