Care2, a “social action network” with over 22 million members and a claimed “reach” of some 150 million people, is featuring an article about the Nevada County Fair Elephant controversy in its July 15th newsletter: 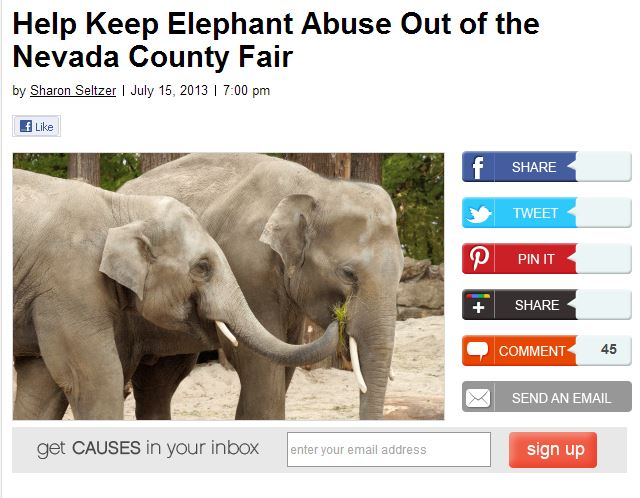 Shelley Frost, program manager of CAPE  [Center for Animal Protection and Education] said, “Elephants are majestic, intelligent animals who don’t belong at a fair, providing rides for children. It’s not the humane thing to do.”

Frost also explained that Have Trunk Will Travel is getting preferential treatment for coming to the fair. Exhibit fees, electrical fees and RV fees have been waived for them, and the fairground is providing 24-hour security. “All this when the rest of the fair has sacrificed budget cuts,” said Frost.

Liz Kellar reported in today’s Union that “an email sent by Nevada County Fair CEO Sandy Woods asking elephant ride supporters to show up at today’s board meeting regarding a highly controversial contract with Have Trunk Will Travel has opponents in an uproar.”

According to the article, Woods also suggested that “if you are able to attend, please wear light blue or denim to show your support.”

In the meantime, opponents of the elephant rides are having a spirited debate on Facebook about whether they too should wear denim in order to reinforce that they are all part of the same community. Others suggest that ride proponents would just spin that as an indication of even wider support for the rides.

The Fair Board will meet again today at 4 PM at Ponderosa Hall in the Fairgrounds to further consider the issue.

“Care2 petition over 107,000 signatur)es! Care2 is sending a representative to personally hand the signatures to the board at the meeting Tuesday.”

“THE MEETING HAS BEEN MOVED TO THE MAIN ST. BUILDING, JUST INSIDE THE MAIN GATE AND TO YOUR RIGHT. Still 4:00.”
(From Facebook page, Protest Elephant Exploitation at Nevada County Fair).