A fascinating article in the New York Times a couple of days ago explains how the temp worker industry evolved from a marginal phenomenon with an uncertain future in the 1940s to a behemoth employing over 3 million temps a day by the turn of the century. The author of the article, Erin Hatton, assistant professor of sociology at the State University of New York, Buffalo, argues that the temp industry has been a critical force in promoting low-wage jobs as the norm:

Low-wage, temporary jobs have become so widespread that they threaten to become the norm. But for some reason this isn’t causing a scandal. At least in the business press, we are more likely to hear plaudits for “lean and mean” companies than angst about the changing nature of work for ordinary Americans.

How did we arrive at this state of affairs? Many argue that it was the inevitable result of macroeconomic forces — globalization, deindustrialization and technological change — beyond our political control. Yet employers had (and have) choices. Rather than squeezing workers, they could have invested in workers and boosted product quality, taking what economists call the high road toward more advanced manufacturing and skilled service work. But this hasn’t happened. Instead, American employers have generally taken the low road: lowering wages and cutting benefits, converting permanent employees into part-time and contingent workers, busting unions and subcontracting and outsourcing jobs. They have done so, in part, because of the extraordinary evangelizing of the temp industry, which rose from humble origins to become a global behemoth.

Hatton explains that in the early days of the temp business, female workers were promoted as no threat to male-dominated union jobs because they were typically housewives who were only working for “pin money.”  An advertisement of the time read, “The typical Kelly Girl… doesn’t want full-time work, but she’s bored with strictly keeping house. Or maybe she just wants to take a job until she pays for a davenport or a new fur coat.”

By the late 1960s the temp industry enlarged its vision and began to pitch its workers as an alternative to the burdensome costs of full-time workers:

In 1971 the recently renamed Kelly Services ran a series of ads in The Office, a human resources journal, promoting the “Never-Never Girl,” who, the company claimed: “Never takes a vacation or holiday. Never asks for a raise. Never costs you a dime for slack time. (When the workload drops, you drop her.) Never has a cold, slipped disc or loose tooth. (Not on your time anyway!) Never costs you for unemployment taxes and Social Security payments. (None of the paperwork, either!) Never costs you for fringe benefits. (They add up to 30% of every payroll dollar.) Never fails to please. (If your Kelly Girl employee doesn’t work out, you don’t pay.)” 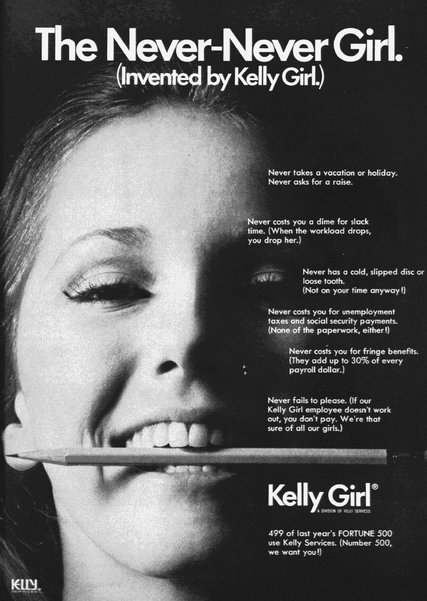 Read the full article here: “The Rise of the Permanent Temp Economy“