Stare at this alarming graph from a report on China’s economy by GMO LLC.

Notice that China’s pattern of non-financial debt-to-GDP ratio closely resembles the patterns of other recent meltdowns (in the U.S., U.K. Japan and Korea).

China appears to be right now on the cusp of its own meltdown. 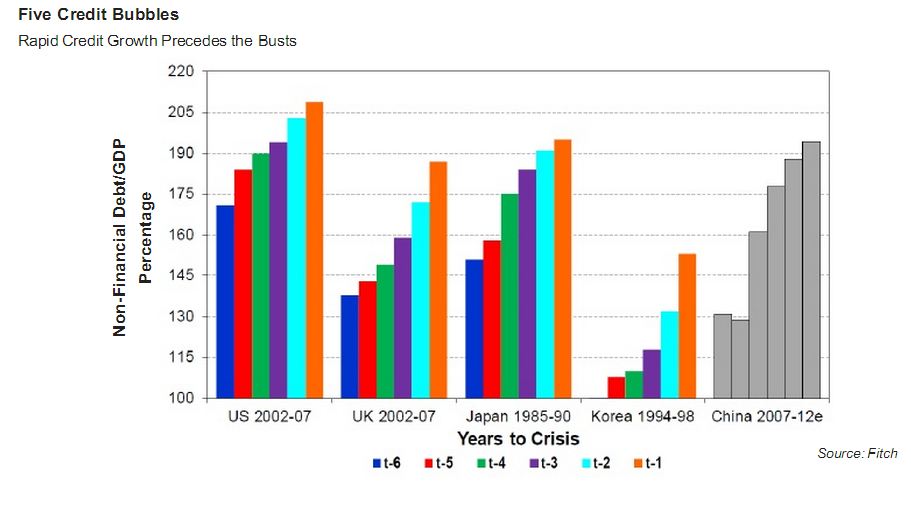 Here’s a bit of the analysis — on the significance of the real estate bubble in China —  from the GMO Report:

Recent research suggests that credit booms are more likely to end in severe busts when they coincide with property bubbles. It’s difficult to prove using purely quantitative tools that China’s property market is in a bubble. There’s no doubt, however, that China has witnessed a tremendous residential construction boom in recent years. Miles upon miles of half-completed apartment blocks encircle many cities across the country. Official data suggest that the value of the unfinished housing stock is equivalent to 20% of GDP and rising.

Real estate collateral supports much of the country’s outstanding debt. Officially, the banks’ exposure to property – through loans to developers and mortgages – is only 22% of their total loan book. The banks, however, are also exposed to real estate through their loans to local government funding vehicles and through sundry off-balance-sheet credit instruments. It’s probably fair to say that at least one-third of bank credit exposures are real estate related.

Developments in the infamous “ghost city” of Ordos, in Inner Mongolia, reveal the vulnerability of China’s credit system to an overblown housing market. The Kangbashi district of Ordos is a totem for China’s property excesses. Kangbashi has enough apartments to shelter a million persons, roughly four times its current population. Until recently,turnover in the local real estate market appears to have been driven by debt-fuelled speculators. Construction in Ordos came to a sudden stop in the fall of 2011 after property prices collapsed (Caixin magazine reports incredibly that prices declined by 85%). More than 90% of the building sites in Kangbashi were said to be idle.

Debt problems soon emerged. A prominent developer in the neighboring city of Baotou hanged himself last June,leaving behind debts of RMB 700 million, according to the National Business Daily. Local property developers were revealed to have funded themselves in the underground loan market, where monthly interest rates range between one and three percent. The city government has run into difficulties after revenues from land sales fell by three-quarters. Local banks also reported an increase in non-performing loans.

Property-related debt problems have cropped up in other cities. In late 2011, funding difficulties at a Hangzhou-based real estate developer imperiled dozens of companies that had issued guarantees over its debts. Property trusts in Nanjing and Beijing have recently threatened to default. Last October, developers in the city of Changsha in Hunan province were reported to have both reneged on debts and sold the same properties to different buyers. Given the vast amount of residential construction in China (estimated at around 12% of GDP) and severe weakness in many property markets, it’s remarkable that real estate lending issues have been relatively contained.