Following Bob’s comment I offered my own scrupulously nonpartisan observation, which — and this rarely happens — I like well enough to reprint here.

RL, that’s a clever and funny way to put it.

But the humor glosses over some important facts.

For instance, what caused the “hole” in the first place (the hole you rightly say we need to be pulled out of)?

The hole was the insufficiency of the demand side of our economy starting in the mid to late 1970s, when for the first time in our history (and because of policy decisions by politicians of both parties) rising productivity no longer created a corresponding rise in worker real wages. Real wages went flat in about 1979 (when inequality also began increasing more rapidly) and have stayed flat since.

The benefits of rising productivity thereafter accrued almost exclusively to the rich, who — because of this tremendous process of wealth redistribution upward — grew richer at an accelerating rate. 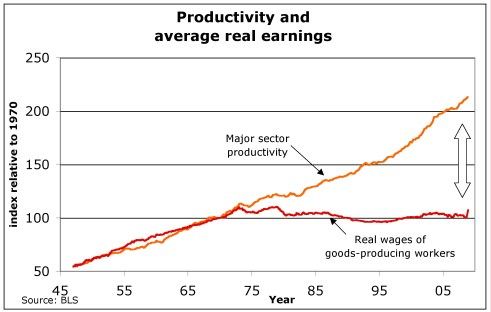 Worker wages, the usual demand engine of our economy, were no longer growing. The problem then became how to fill that demand gap (the “hole”) … where to find (or how to create) demand to keep the economy afloat?

First a stock bubble sustained demand for awhile in the mid to late 1990s, followed by a (dot-com) bust in the year 2000.

Then there was the housing bubble, pumped up by the Fed’s “historically low interest rates,” as you point out. Artificially inflated home mortgage equity, while it lasted, was the favorite working class/middle class ATM supporting demand until 2008, when that bubble burst.

So what should we do now?

We could try to reflate the bubble through private borrowing at historically low interest rates and investing again in non-productive financial instruments (to keep the cycle of boom and bust sputtering along continuously). Hair of the dog that bit us.

Or, we could do it by means of public borrowing at historically low interest rates and investing in infrastructure and job growth as a way to restore the historical lockstep connection between rising productivity and rising real wages. WWII provided the impetus for this solution after the depression of the 1930s.

It’s worth noting that in the usual cycle of boom and bust … inequality (with its destruction of demand through the impoverishment of the working class) reaches its peak just before the bust phase. This was true in 1928 and true again in 2008 (and, if you look carefully, you’ll probably find that to be the case in most earlier depressions).

In other words, there appears to be a cause and effect relationship between excessive inequality and the bust phase of the perennial boom and bust cycle.

This moves the issue of inequality from a “mere” moral issue into the realm of economic practicality and economic well-being.

Recent economic literature is full of the sharpening realization that extreme inequality in a society is toxic to its economic health.

“Inequality and Instability: A Study of the World Economy Just Before the Great Crisis,” by James Galbraith.

“The Price of Inequality: How Today’s Divided Society Endangers Our Future,” by Joseph Stiglitz.

“Beyond Outrage: Expanded Edition: What has gone wrong with our economy and our democracy, and how to fix it,” by Robert Reich.

“The Conservative Nanny State: How the Wealthy Use the Government to Stay Rich and Get Richer,” by Dean Baker.

“Inequality Matters: The Growing Economic Divide in America and Its Poisonous Consequences,” by James Lardner and David Smith.

It’s also worth repeating that the original hole was the result of deliberate policy decisions (favoring the 1% over the 99%, if you want to put it that way) made by members of both political parties.

Whether we overcome the current doldrums by more engineered boom and bust cycles or — on the contrary — by intelligent long-range investment in our nation’s productive capacities … continues to be a policy issue entirely dependent on statesmen of good will of both parties making the right decisions in the public interest.

In other words, we’re probably screwed.