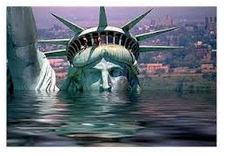 If climate scientists say that a 3.6 degree Fahrenheit increase in global temperature by the year 2100 would be “catastrophic” — and they do — what word should we use to describe the more likely 10 degree increase? We’re starting to get into actual phrases like “civilization destroying.”

The “Nate Silvers of climate science” (the empiricists) predict a climate “landslide” (not in the good sense), according to a clever but terrifying article by David Roberts of Grist:

Throughout this long, crazy campaign, there’s been a tension simmering between empiricists like Nate Silver and Sam Wang, who cited poll data showing Obama with a small but durable lead, and pundits who trusted their “guts” and the “narrative,” both of which indicated that Romney had all the momentum after the first debate.

In the face of model projections like Silver’s, Jonah Goldberg said that “the soul … is not so easily number-crunched.” David Brooks warned that “experts with fancy computer models are terrible at predicting human behavior.” Joe Scarborough said “anybody that thinks that this race is anything but a tossup right now is such an ideologue.” Peggy Noonan said that “the vibrations are right” for a Romney win. All sorts of conservative pundits were convinced the Romney campaign just felt like a winner.

As it happens, there’s another issue in American politics where empiricists are forecasting the future and being ignored. Here’s what the Nate Silvers of climate science are up to:

” … the world could be in for a devastating increase of about eight degrees Fahrenheit by 2100, resulting in drastically higher seas, disappearing coastlines and more severe droughts, floods and other destructive weather.”

At our current rate rate of decarbonization (1.6 percent) we are on track for a temperature rise of 10.8 degrees (6 degrees Celsius) by 2100.

Let’s be clear about this. Scientists consider 3.6 degrees catastrophic. There are serious scientists who doubt that human civilization can endure at all in the face of 7.2 degrees. And we are headed for 10.8.