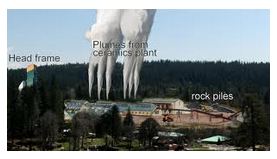 Jeff Pelline, in his Sierra Foothils Report a few days ago, wrote about  City Council candidate Howard Levine’s position on various local issues, including his support for re-opening the Idaho-Maryland Mine. I’ve spent enough years, in an effort with others, to research all aspects of this issue, including its inadequacy as a business proposition, that I’m inclined now to the view that anyone who supports re-opening the mine must not be acquainted with all the facts.

Here are the comments I appended to Jeff’s posting, encouraging current council members as well as candidate hopefuls to study the issue more fully:

I hope that if Howard Levine is elected to the council, he will reconsider his support for re-opening the Idaho Maryland Mine.

Now that Emgold’s application has fortunately expired, the council should critique its own role in allowing such a poorly-crafted business proposal to drag out for nearly a decade, not only wasting valuable community resources, but preventing a more viable project for that site to be considered in its stead.

We expect the council, at the very least, to recognize a viable business proposal when it sees one, but its handling of the Emgold fiasco suggests that it still has some important lessons to learn in this regard.

It’s tempting to say that the council should be able to evaluate a proposal on its business merits altogether aside from its environmental impacts. But in truth the environmental impacts of a proposal are integral to its economic viability. It’s not clear to me that this fundamental aspect of doing business in the Sierras is well-understood by the current council, much less by hopefuls like Howard Levine.(See the work of Steve Frisch’s Sierra Business Council for a good understanding of this issue).

Among the council’s biggest mistakes with Emgold was its failure to obtain a competent economic viability study of the project proposal contained in Emgold’s application. The 2005 study conducted by the SF Bay Area consulting group Bay Area Economics, an organization that had no experience with evaluating a mining project, was not adequate.

The council should immediately establish, with community feedback, some ground rules and guidelines for a minimally-acceptable application for mining within city limits, since the impacts of such a development will profoundly affect Grass Valley’s character and business climate.

There are good arguments for prohibiting mining altogether within city limits. The council should be willing to hear and consider these arguments.

After some years working with others to critique Emgold’s application, I have come to the conclusion that the biggest overlooked fact about the idea of re-opening the IMM is its monstrously huge scale. Few really grasp this.

The underground extent of the IMM is about the same as the city of Grass valley itself (~3200 acres). It runs under the Sierra Nevada Memorial Hospital, under the Basin, and out to the Y juncture of 174 and Brunswick.

This geographical extent, as huge as it is, is exceeded by its potential sphere of harm (including hydrologic uncertainty about well failures, etc). This is all copiously documented in the work of CLAIM-GV (Citizens Looking At Impacts of Mining in Grass Valley).

A common misunderstanding is that the mine — if reopened in the heart of downtown Grass Valley — would have limited impact, potentially affecting only those who live in close proximity to it.

Because of its scale, every resident in Western Nevada County effectively lives in close proximity to IMM.

My suggestion to Howard Levine and all other council hopefuls, as well as to the current council members, is to start this self-critique by reading Tom Grundy’s excellent and widely published article on the weaknesses of Emgold’s application. It was published in the Union, in Yubanet and in my own Sierra Voices, which I shamelessly plug here:

“Will Grass Valley Learn From Its Mistakes With Emgold?“