A recent comment by Biden was racial, but it wasn’t racist. And truth be told, it needed to be said.

I know what you’re thinking: There goes gaffe-prone Vice-President Joe Biden again, putting his foot in mouth, saying the wrong thing at the wrong time, causing headaches for the Obama administration. His latest offense: speaking in Virginia, the VP spoke to a cadre of Democratic African-American supporters, telling them how a Romney presidency would “unchain” Wall Street and “put y’all back in chains,” setting their hard-earned economic and civil rights back toward the dark decades of segregation. It didn’t take long for the usual traducers to accuse Biden of interjecting race into the campaign. 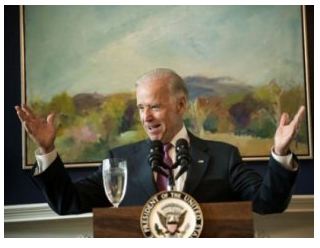 But here’s the problem – what Biden said was indeed racial, but it wasn’t racist. And truth be told, it needed to be said. A great many black Democrats in this country would agree with what he said, this writer included.

Why was it necessary for Biden to go for the metaphor of bondage? Because, as the great hip-hop trio De La Soul said, “The stakes is high.” I have personally heard some African Americans disenchanted that Obama is not the super-bad, black radical president they thought he would be say that they will sit this election out because Obama is just a politician, and the Democrats are just like the Republicans, so it doesn’t matter who wins. That defeatist mentality is dangerous when you consider how, if Mitt Romney and Paul Ryan’s fiscal policies take effect, Medicaid, Medicare and other “entitlement” programs will be cut and will push the poor, minorities and women who depend on those programs further into the Tea Party-soaked quicksand of debt bondage.

In an age where political correctness is the overdosed order of the day, Vice-President Biden delivered the right kind of castor oil to cleanse the toxicity that obscures truth-telling in the hypersensitive era of the supposed, post-racial Obama presidency. In this kind of atmosphere, politicians are always, in the immortal words of James Brown, “talking loud and saying nothing.” With Biden, it’s more like deeds, not words.

As a native Delawarean and African-American, I always chaffed at the caricature of Biden as forgetful loose cannon, ‘cause I (and we First Staters) get Uncle Joe! He is the living embodiment of the small-wondered complexities and contradictions of the nation’s second smallest state; simultaneously Northern and Southern, urban and rural, equally distanced from New York and Washington, DC; the first state to ratify the Constitution and the last to end slavery. To be a politician in this state (with only three counties), Biden learned how to navigate between the urban New Castle County, where Wilmington, the state’s largest city is based; Kent County, home to the state capitol and the Dover Downs Speedway; and Sussex County, “downstate,” or “slower-lower,” to us city-fied Wilmingtonians. The Vice Prez has spoken candidly and bluntly to whites and particularly, to blacks.

I know a host of old-timers who remember Biden when he was a teenaged lifeguard at Prices Run Swimming Pool in Wilmington’s East Side, which was (and still is) black. He was there when Martin Luther King Jr. was killed in 1968. “I was a fascination to everybody at Prices Run,” Biden wrote in his memoir,Promises to Keep: On Life and Politics. “Most of the people I got to know there had literally never really talked to a white person.”

Black Delawareans have known this fact about Biden ever since he began his political career in the late ’60s, and against local custom, campaigned in black neighborhoods. As Chana Garcia wrote on Root.com,

“In the early ’80s, he pushed for more minorities to enroll in service academies such as West Point. A decade later, he nominated Gregory Sleet to serve as Delaware’s first black U.S. attorney and then as the state’s first black federal judge. He also helped local politicians like former City Councilman-at-Large Theo Gregory get elected.”

More broadly to the point: blacks care less what white politicians say; they care about what they support – as evidenced by the overwhelmingly positive support Biden enjoys from African Americans who benefitted from his passage of the Voting rights Act, Affirmative Action and Great Society programs.

Ask most brothers and sisters in my home state about Biden’s alleged gaffes and they’ll just shrug their shoulders and say, “that’s Joe.”  What they do marvel at is the extraordinary way Biden kept his mouth shut all these years. That Colgate-perfect smile he flashed at that infamous “debate” with Sarah Palin held back the fury we know Biden is capable of unleashing whenever he encounters absurdity, which is an occupational hazard these days.

Black and tan Delaware residents also know that Biden’s smile belies a lifetime’s worth of pain. He lost his first wife and year-old child in an automobile accident in 1972, suffered a brain aneurysm in his first presidential campaign in 1988, and overcame a stuttering problem to become one of the most accomplished foreign policy experts in our nation’s history. Blacks will forgive Biden’s missteps, simply because he’s been solid on traditional liberal issues — affirmative action, the equalization of educational opportunities and a woman’s right to choose.  (His uncharacteristically chauvinist treatment of Anita Hill at the infamous Clarence Thomas Supreme Court hearing marking one big blemish against him.)

Because of Delaware’s small size, we always ran into Biden; at the supermarket, the University of Delaware Blue Hens Game, and more often than not, the Amtrak station, where as senator, he took the one-and-a-half train ride to DC, and came home to raise his kids. My late mother worked for the government, and often rode and chatted with Biden on the way to DC.

Of course, the haters have a list of supposed Biden blunders: his characterization of then-candidate Obama as the “first mainstream African American who is articulate and bright and clean and a nice-looking guy,” his blunt assessment of Delaware as “a slave state … [with] the eighth largest black population in the country,” and his accurate, though clumsy 2006 comment on the unprecedented influx of Asian storeowners in biracial Delaware,” when he stated that, “you cannot go to a 7-Eleven or a Dunkin’ Donuts unless you have a slight Indian accent. I’m not joking.”

Now that the Obama administration is vying for its second term, I think the world is going to see and hear the Joe Biden we Delawareans are used to. Compared to the coded language that counts for “straight talk” these days, I’ll take Uncle Joe’s jagged-edged truths any day.

Eugene Holley, Jr. is a Delaware-based writer/essayist. He has written for the New York Times Book Review, Amazon.com, Ebony.com and Vibe. His work was featured in the anthologies, Best Music Writing: 2010, and Albert Murray and the Aesthetic Imagination of a Nation.