Ever since we first bought property here in Nevada County over thirty-five years ago, people from time-to-time have asked me whether I’m “related to the same Pelton who invented the water wheel.” I’ve always shrugged and said “I don’t know … probably.” I’ve enjoyed the possibility that it might be true, since the name has a certain cachet in these parts.

A few days ago I learned — thanks to our daughter’s recent interest in genealogy and her father-in-law’s expertise at it — that Lester Allan Pelton is indeed my cousin (“fourth cousin, three times removed”).

What do you know! I guess mining is kind of our family business.

Or, at least water wheels.

As I understand it, cousin Lester hoped that his invention would make it unnecessary to burn so many forests in the steam engines powering the mines (by replacing them). He got his wish. I take this to mean that Lester was a 19th century environmentalist, and I choose to believe that — if he were alive today — he would oppose the re-opening of the Idaho-Maryland Mine, as I oppose it.

The first time I suspected that we were related occurred about twenty years ago when we got a small bio of him inserted into our Palo Alto PG&E bill. It mentioned that he died broke. “Aha!” I thought. “We are related.”

Our daughter says about Lester, “He looks like a Pelton.” 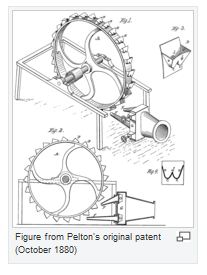