It’s October of 2021, almost a year after the only president ever impeached twice, became the Big Loser of the 2020 election (I just googled “twice-impeached loser” and got over 5 million results, most of the first dozen pages of which were about a man I’m trying very hard not to identify here by name).

As our penalty jar illustrates below — we considered his name to be such a profanity, soon after he was elected, that we devised a way to both penalize ourselves for uttering it, and also to convert the profanity into something worthwhile (by periodically donating the contents of the jar to various environmental causes). And now, since he persists in being our national nightmare, we’re considering reviving our penalty jar, not because it will change the world, but because it will help us stay sane. 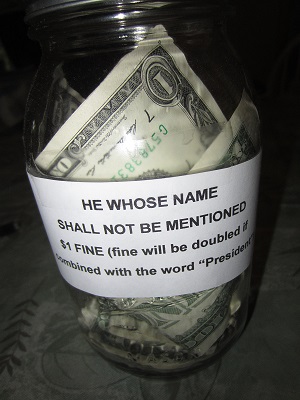