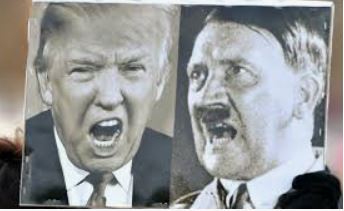 “Like historical fascist leaders, Trump has presented himself as the single source of truth. His use of the term “fake news” echoed the Nazi smear Lügenpresse (“lying press”); like the Nazis, he referred to reporters as “enemies of the people.” Like Adolf Hitler, he came to power at a moment when the conventional press had taken a beating; the financial crisis of 2008 did to American newspapers what the Great Depression did to German ones. The Nazis thought that they could use radio to replace the old pluralism of the newspaper; Trump tried to do the same with Twitter.”

“When Senator Ted Cruz announced his intention to challenge the Electoral College vote, he invoked the Compromise of 1877, which resolved the presidential election of 1876. Commentators pointed out that this was no relevant precedent, since back then there really were serious voter irregularities and there really was a stalemate in Congress. For African-Americans, however, the seemingly gratuitous reference led somewhere else. The Compromise of 1877 — in which Rutherford B. Hayes would have the presidency, provided that he withdrew federal power from the South — was the very arrangement whereby African-Americans were driven from voting booths for the better part of a century. It was effectively the end of Reconstruction, the beginning of segregation, legal discrimination and Jim Crow. It is the original sin of American history in the post-slavery era, our closest brush with fascism so far.”

“Trump could make some voters believe that he had won the 2020 election, but he was unable to bring institutions along with his big lie. And he could bring his supporters to Washington and send them on a rampage in the Capitol, but none appeared to have any very clear idea of how this was to work or what their presence would accomplish. It is hard to think of a comparable insurrectionary moment, when a building of great significance was seized, that involved so much milling around.”

“The American Abyss:
A historian of fascism and political atrocity on Trump, the mob and what comes next”

And here’s Professor Snyder’s October prediction of a Trump coup attempt:
“Historian Timothy Snyder warns that America is already in its own “slow-motion Reichstag Fire“