“For his entire life, Mr. Trump has been a self-described fatalist. He has called himself a fatalist in interviews spanning nearly 30 years. This admission is a rare expression of consistent honesty for a man infamous for lying about everything – his fortune, his criminal ties, objective reality. It’s the outlook he hints at when he does things such as retweeting a meme of himself fiddling like Nero, while the novel coronavirus spreads across the United States.

“Nothing seems to matter to Mr. Trump – not only in the sense that the things that matter to other people, like love and loss, do not matter to him. Nothingness itself matters: Destruction and annihilation are what he craves. “When bad times come, then I’ll get whatever I want,” he told Barbara Walters in an 1980s interview. His initial reaction to 9/11 was that the collapse of the World Trade Center made his own buildings look taller. His initial reaction to the 2008 economic collapse was joy at his potential to profit.

“Everything to Mr. Trump is transactional, and you – all of you – are the transaction.

“In February, 2014, when asked about the direction of the United States, Mr. Trump rooted for its demise:

“You know what solves it?” Mr. Trump told Fox News. “When the economy crashes, when the country goes to total hell and everything is a disaster. Then you’ll have a [laughs], you know, you’ll have riots to go back to where we used to be when we were great.”

Read the full op-ed here:
“The Plague of Donald Trump” 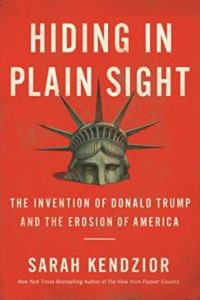