The following impromptu “essay” was written by Steve Frisch in the form of a comment to his Facebook friends, and reprinted here with his permission, in honor of July 4th, 2017.

“I think the first step in celebrating America this weekend is recognizing that as much of a national embarrassment as Trump is … this too will pass.

“Yeah, I am embarrassed by having a President, apparently selected by my peers, who brags about grabbing pussy, bullies his opponents and staff, has been implicated by numerous women including his ex-wife in sexual assault, bought a beauty pageant so he could walk in on young women half naked, has been sued by the Department of Justice for racial discrimination, hob nobs with the New York mafia, has been fined for breaking casino gambling rules, has been sued for intimidating tenants in his buildings, was fined $750,000 for breaking anti-trust rules, has bankrupted 4 businesses while saying America needs to be run like one of his businesses, hired undocumented workers while saying we should build a wall, has stiffed literally hundreds of contractors on millions of dollars worth of goods and services delivered to him, and uses the money to buy his own books so he can say they are bestsellers and print fake covers of Time magazine to say how great he is. Oh and did I miss that he has a gold plated shitter?

“It says a lot that that paragraph is so long yet contains a mere fraction of his gauche behavior.

“But lets get real, he is 71 years old, and a friend of mine says we are just a funeral away from perfection.

“I know, I know, I spend a lot of time expressing how disgusted I am with Trump. But I spend a hell of a lot more time working hard to try to counter the idiocy that seems to have descended on our nation and eventually WE will win.

“To all my friends doing all those good things out there to make America a better place for everyone I salute you and love you today.

“We are a nation that values freedom and individualism, expression and speech, privacy and free will, hard work and the benefits it brings.

“It may take time, and be a fight, and be too slow coming for ‘the other,’ but we value equality, ensconced it in our founding documents, rededicated in blood in the 14th amendment, fought for at Seneca Falls, the lunch counter, in farm fields, at Stonewall, and in court every goddamn day.

“More important, we are a nation and a people who look forward. We are less concerned with our European, or Asian, or African past and their social conventions and traditions than we are the future and making the future count. There is a fundamental American belief in progress and a better future.

“We are bold, brash, assertive, direct, rough hewn, and at times self indulgent and chauvinistic, but at the end of the day we value goodness, honesty, sacrifice and achievement. We still weep and revel in the accomplishment of others. We root for the little guy, followed the Cubs through a 106 year drought, and when every other option is exhausted as Churchill said, we end up doing the right thing. In the end by and large, we are good.

“So celebrate the 4th of July because we are here…and no one or any authoritarian blow hard can take that away.

“Once civic responsibility was a bedrock American value, and compared to many societies it still is…but if we have one challenge in the next few years it will be re-engaging to advance goodness. Our actions to advance democratic governance matter…it is the societies where people give up, hide, protect themselves putting their peers at risk, that democracy dies. We have a responsibility to defend all of those values articulated above every single day. Whether through involvement in an organization, on policy, through charity, in church, or at the indivisible meeting, we uphold democratic values every day and fight for our freedom.

“This too will pass and the next America will be defined by what you do today.” 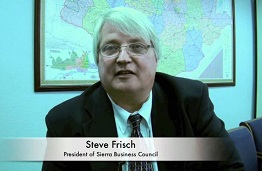 Prior to joining the Sierra Business Council, Steve owned and operated a small business in Truckee. Steve serves on the board of the California Stewardship Network, the Large Landscape Practitioners Network, the National Geographic Geo-tourism Council, Capital Public Radio, and Leadership For Jobs and a New Economy.  Steve is also a former Fulbright Exchange Program Fellow, sharing information and knowledge gained in the Sierra Nevada in China and Mongolia.  Steve is a graduate of San Francisco State University with a B.A. in Political Science.